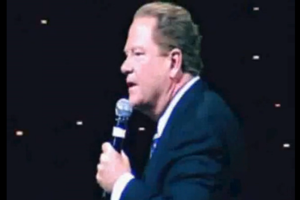 MSNBC and talk radio host Ed Schultz delivered his address to the progressive congregation of bloggers at the Netroots Nation conference, and he had some strong words for the White House. Alluding to the Shirley Sherrod fiasco, Schultz quipped that the White House “must have a sissy room,” and that despite the fact that he “busted my ass for Obama,” the President visited Special Report with Bret Baier, “in my time slot.”

Most of the speech was full of the type of liberal red meat Schultz often delivers on his show, mostly directed at Fox News. Of Glenn Beck, he said, “I’m really sorry that Glenn Beck’s going blind because I think it’s a travesty he’s not gonna see the country he’s trying to destroy.” In a high-pitched voice, he mocked the White House’s relationship with the network: “How can this country get along… without Fox News?”

But the sharpest attack was about President Obama himself, and it was, specifically, for never agreeing to be on The Ed Show:

“I busted my ass for Obama. I mean, I took my radio show on the road, I did town halls, talked to people… and President Obama, you don’t come to Ed– he goes to Bret Baier on Fox News, in my time slot. Now, my show’s going to be ok, but if you were in my position, would you say, ‘what’s that all about?’ Loyalty.”

Devoting so much time to attacking President Obama– and implying that he has betrayed the people that elected him– seems a strange line of attack at a progressive conference, especially in light of the continuous assault under which the White House has been from the right, between Sherrod and the New Black Panthers and criticism for the oil spill, the economy, and, to a lesser extent, foreign affairs. The argument that Obama is a traitor because he hasn’t been on MSNBC enough isn’t really one that has risen organically among members of the left and, as Gawker’s Jim Newell explains, there is a rationale behind Obama’s “very, very rare” interview with Baier in March: “The interview with Baier… came immediately before the final health care vote in March. This was at a point when Democratic support for passage had consolidated to nearly 90% while many independents, some of whom watch Fox News, were still quite leery.”

Video of Schultz’s speech below: