Did NRA Endorse The Guy Who Wanted To Hire More Cops, Or The Guy Who Mocked Hiring Cops?
video 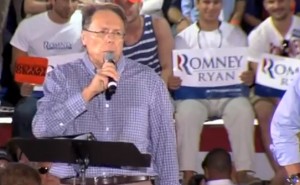 I know it was just a matter of weeks ago, but there were two candidates in this past presidential election, and one of them wanted to hire more police, firefighters, and teachers, and the other guy made fun of him for it. Ever since NRA executive vice president Wayne LaPierre offered up his plan to demand an armed policeman or security guard at every school, I’ve been struggling to remember which one of these guys the NRA endorsed, because it would seem obvious that they would endorse the “hire cops” guy, since the “hire cops? HA-ha!” guy also signed an assault weapons ban (of which he said “These guns are not made for recreation or self-defense. They are instruments of destruction with the sole purpose of hunting down and killing people.”) into law, but my memory is hazy on the point.

As it turns out, LaPierre endorsed this guy:

When Wayne LaPierre endorsed the “don’t hire cops” guy, however, he did warn about a coming “rampage,” and of “going to our graves” kissing freedom goodbye. Unfortunately, he was referring to the freedom to arm mass murderers:

In fact, he endorsed anti-cop-hiring Mitt Romney a mere ten weeks before he went before a grieving nation to explain that everything except guns and ammo killed twenty children and six adults at Sandy Hook Elementary School, and that the only solution he could offer was to “call on Congress today to act immediately, to appropriate whatever is necessary to put armed police officers in every school.”

But, wait, how can that be? If Wayne LaPierre endorsed the guy who was opposed to hiring more cops, how can he now pose hiring more cops as the only solution to gun violence in America? Wouldn’t more cops have also helped in Aurora, or Tucson, or Oak Creek, or every other scene of mass murder? Or is Wayne LaPierre’s demand for a cop in every school just a desperate attempt to distract people from passing new gun regulations, and a cynical one, given that he knows full well that the candidates he helped elect are dedicated to choking off federal funding for more cops? It’s a bit like demanding that Marie Antoinette pass a laws requiring everyone to eat cake. However, there is a way for Democrats to call Wayne LaPierre’s bluff.

While I have heard some liberals express misgivings about a cop in every school, most parents probably like the idea. As I noted, long before LaPierre broke his organization’s silence, the elementary school my kids go to is guarded by a police officer behind a locked door, just in front of the principal’s office, and while that offers some grim peace of mind, that police officer (who probably favors at least reinstating the assault weapons ban) would have been badly outgunned by the Sandy Hook shooter. What little comfort that affords, however, is a quirk of my township’s extremely high ratio of policemen to residents. We’re not a wealthy town, or a dangerous one, but we have a lot of cops here.

All of those cops couldn’t save the two people who were murdered by a man with an AR-15 in October of 2010, a man who then carried that weapon from the scene of the crime, not a hundred yards from my house, to the public golf course that surrounds my neighborhood, where he later took his own life. My kids’ schools were put on lockdown that day, and knowing that there was an armed policeman at each of those schools was better than not knowing it, but was far outweighed by the knowledge that an at-large murderer had them badly outgunned, and at a severe tactical disadvantage. You want a cop in every school? Fine, that’s a start, but I want those weapons on lockdown, too.

Not every town can afford to put a policeman in every school, though, and this NRA-supported Republican congress is unlikely to fund such an initiative, at least, not without demanding matching cuts in spending, cuts that many schools can ill-afford. However, Democrats can get ahead of the GOP by proposing legislation that funds a police officer in every school, but pays for it they way it should be paid for: out of the defense budget. If Wayne LaPierre is really that concerned about this serious national security issue, he would have to support such a law.

Absent such a law, the results of LaPierre’s proposal, which are already being felt, will be a push for armed private security guards in schools that can afford the, or worse, armed teachers and administrators. Whatever moderate comfort a highly-trained police officer provides parents, the exact opposite is true of some armed rent-a-cop from a lowest-bidder security firm, or a school full of jumpy teachers with guns. Even New York’s finest can shoot the wrong people in a chaotic gun fracas. Imagine the denizens of your kid’s faculty lounge blazing away.

Whether or not there are police in schools, though, the fact remains that we can, and we must, make serious efforts to limit the kinds of weapons and ammunition that the perpetrators of gun violence have access to. There aren’t enough cops in the world to harden every target against arsenals like the one deployed in Newtown, Connecticut, and too many children to hide.