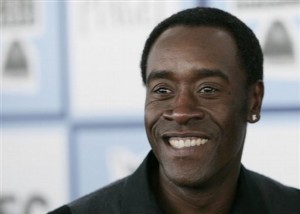 Actors and other individuals who find themselves with a handy, built-in audience and soap boxes practically custom-built and handed out to them often run into something of a catch-22: Here you have a large group of people who, whether they like it or not, are granted access to your thoughts and opinions via the media. You have the opportunity — and, perhaps, as one might see it — the responsibility to convey a certain message to a sizable group. But then you run into the possibility, the very distinct likelihood, or turning people off, of having people react to your message with a very good question: “Why in the world would I care what you have to say?” while at the same time taking issue with your comments and, as such, making them a part of our national conversation.

Actor Don Cheadle, who has managed to help bring us both the heartbreaking Hotel Rwanda and the perplexing Hotel for Dogs, is currently in such a situation. In an interview with Jet magazine, Cheadle, who has a new TV show coming out soon, shared that he believes President Barack Obama “inherited an impossible situation. I wish he had not been so much of a consensus-seeker. I just wanted to see a more ‘gangsta’ president.”

He later took to Twitter to explain his comments. Here’s an excerpt from what Cheadle shared:

I realize that when speaking to reporters who are looking for the juiciest comments to print, a word like gangster in connection with a black president uttered by a black celebrity can almost be too much to resist. I also realize that when you do an interview you are likely to at least have your comments reduced and constructed to fit into a required space and never do you have say over the final edit. I say this not in defense but to offer some perspective. I believe I used the word gangster and I meant it. But I wasn’t talking about pants sagging and forties and “hoes” or any of that other nonsense and I find it hard to believe that that is what some people thought I was saying. I was talking about wish fulfillment; my own and my desire to witness something more than I had.

RELATED: Matt Damon Would Have Preferred ‘A One-Term President With Balls’

But the actor’s attempt to offer some context and perspective to a provocative word choice brought with it another problematic phrase:

I am a father, a “husband”, an actor and a citizen of this country and planet who flippantly expressed on a press tour, a desire to see our president riding roughshod over his adversaries to get the job done for the least represented amongst us. I still want that. I still want that with full knowledge that it might be an uphill fight that ultimately proves impossible given the hostile impasse our president faces. I still have a fevered dream of the POTUS smacking up John Boehner in a public forum in middle America and making him defend support of tax cuts for the super rich.

“I kinda want a gangster president,” he continued. “I was about to write that in the future I would chose my words more carefully but I’m sure I won’t. Besides,” he added. “I think the debate is more enriching.”

NewsBusters weighed in to note that, in his Twitter missive (Twissive?), Cheadle “concluded with violent thoughts, and then peace” upon writing that “I’m glad he’s at the wheel and not me – I woulda swung at somebody by now. I wish you all peace in the New Year and let’s keep on keeping on.”

Given the impassioned debate surrounding the sometimes violence-tinged rhetoric or outright bloodthirsty and disturbing diatribes expressed by some in the public sphere in the wake of last year’s shooting in Arizona, Cheadle’s come at an interesting, if not volatile, time in our national discussion.

But, much more importantly: Who will be the next Ocean’s Eleven through 117 castmember to let us know all about his political beliefs? (My money is on Casey Affleck.)