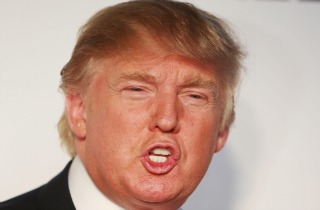 Celebrity Apprentice host, Matt Boyle‘s likely puppet-master, and real estate mogul Donald Trump emerged from a sewer beneath Fifth Avenue this afternoon to grace us with his re-hashing of the internet’s most overdone joke of the late aughts.

In case you haven’t tried the veal yet, the joke goes like this: “Ten years ago we had Steve Jobs, Bob Hope, and Johnny Cash. Now we have no jobs, no hope, and no cash!”

Trump posted it to Twitter, because he will clearly do it better this time, adding his own “and no respect” to the end:

Again: Ten years ago we had Steve Jobs, Bob Hope and Johnny Cash. Now we have no jobs, no hope, and no cash! (and no respect)

Who is Mr. Respect? It’s unclear. Perhaps Trump is referring to Rodney Dangerfield‘s trademark line? Or maybe, more realistically, the logic of the original joke slipped by the real estate mogul.

Also, the joke’s on Trump because the joke he’d likely claim he invented is officially outdated. Johnny Cash and Bob Hope perished in 2003. (Dangerfield died in 2004, so Mr. Respect could be him!) Math is hard: It’s 2014. That would make it eleven years, and thus America did NOT have any hope or cash ten years ago.

But we do still have money.

Maybe Trump’s Twitter activity is all some elaborate ruse aimed at making us mock him so that he gets more media attention (his mana) and grows stronger by the minute until we all must kneel before a thousand-foot-tall Trumpzilla. What have we become?!

UPDATE: It appears Trump deleted the tweet. Maybe he plans to return with an even better joke. Time will tell. We’ll stand by.