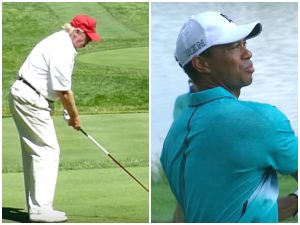 President-elect Donald Trump is spending his Friday afternoon out on the links in West Palm Beach, FL — at Trump International Golf Club. Joining him in his foursome are two members of the club, and 14-time major champion Tiger Woods.

Fox News reports that Woods, one day removed from his posting a shirtless photo of himself which made a splash on Twitter, requested the tee time with the President-elect, and Trump was happy to oblige.

On Fox Business Friday morning, Sean Spicer — Trump’s pick for press secretary — described the President-elect and the golfer as “friends.”

Woods has also played golf with President Barack Obama in the past. The two, in fact, played several rounds together during a 2013 trip to Florida.

Trump, in the past, has criticized Obama for playing golf while in office.

While our wonderful president was out playing golf all day, the TSA is falling apart, just like our government! Airports a total disaster!

Spicer was asked about Obama’s time on the golf course, during his Fox Business appearance Friday, and why he believes it’s okay for Trump to hit the links.

“I think there’s a difference,” Spicer said. He’s not President yet. And if you look at the flurry of meetings that he’s had — the President-elect has met with over 100 individuals for positions…So yes, he has kept extremely busy. But once in a while, he will play a round of golf.”