You thought the day was over yesterday when you came home from work and went to sleep — and in many ways it was. 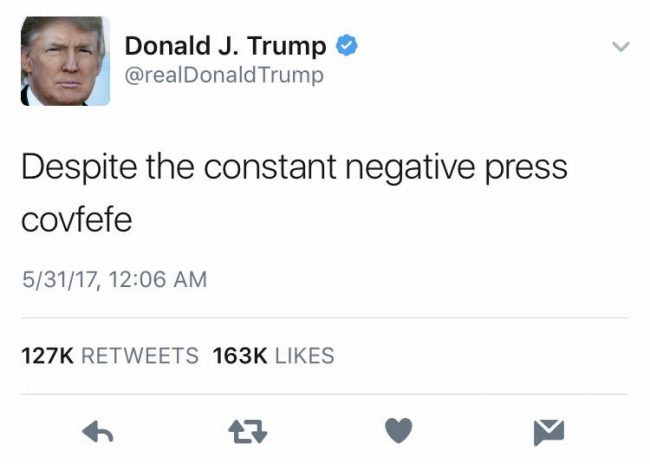 The president then appears to have gone to sleep. The Tweet remained undisturbed overnight until being deleted at approximately 5:48 a.m on Wednesday.

But as you can see from the above image, there is still life online after the the U.S. eastern seaboard goes to sleep. In the intervening hours that marked its existence, the Tweet ricocheted around the web generating more than 127,000 retweets and 163,000 likes — rivaling some of Trump’s most tweeted pronouncements ever.

Now anybody who looks at this for half a second could tell it was a touch typing error, and that the president almost certainly  meant to say the word coverage — which would have been very on brand.

But of course everyone is a comedian on Twitter and before it was removed, people certainly had their say.

Covfefe: When you make a mistake, but play it off like you knew what you were doing.

It’s 5:50 am & his tweet is gone. The sun rises &we all walk home in our party clothes.Was it all just a dream? The wind whispered…covfefe

I applaud the President’s courage, raising #covfefe awareness after 8 years of disastrous neglect by the Obama Administration.

I was diagnosed with #CovFefe pic.twitter.com/DR6Lk7PuiL

DEVELOPING: Meaning of term “covfefe” remains under analysis by Ministry of State Security.

This story will be updated as events transpire.

My former colleague Phil Lewis spoke for all of us.

When people wake up in the morning knowing they missed the #Covfefe action pic.twitter.com/NDuALUCGNI