Doritos Considering ‘Lady-Friendly’ Chips That Don’t Crunch As Much 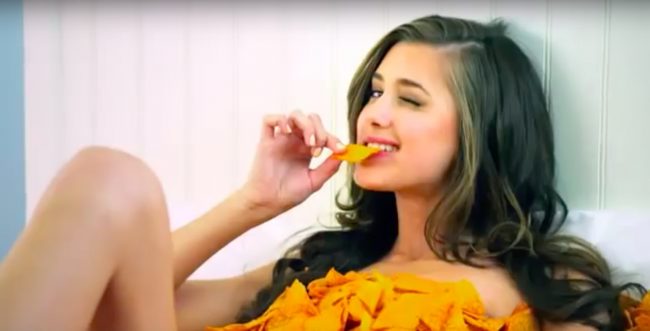 Well, gang, here we are. It’s 2018 and Doritos is making less crunchy chips for ladies. I sit here in complete incredulity, but you know what, we basically have a Nacho Cheese Dorito for a president, so I guess I shouldn’t be too surprised.

The logic is what you would expect: According to consumer research conducted by PepsiCo, which owns Doritos and pretty much every other poison you put into your body (delicious poison, mind you), women are less interested in eating crunchy chips in public. So what do you do? Make a less crunchy, more dainty chip for the ladies! It’s foolproof!

“Although women would love to crunch crisps loudly, lick their fingers and pour crumbs from the bag into their mouth afterwards, they prefer not to do this in public,” global chief exec Indra Nooyi said.

Do you see the hole in Nooyi’s thinking, though? I’ll give you a second. Okay, time’s up: by Nooyi’s own admission, if women would love to do something and don’t do it, it’s not because they’re looking for an alternative. It’s because they don’t feel permitted to engage in what’s fun for them.

How to solve the problem? Perhaps don’t make women feel shitty for eating normal, crunchy chips instead of accommodating an antiquated stereotype which allows chauvinistic men to continue to embrace the illusion that women are fairies who don’t chew noisily or fart.