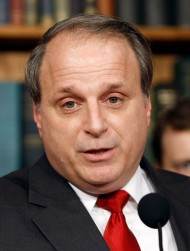 Where to start. The latest chapter in the Rep. Eric Massa (D-NY) surprise departure (retirement) from Congress unfolded yesterday when Massa announced during a radio show appearance (audio below) that ethics inquiry into a complaint that a male staffer in his office was made “uncomfortable” by Massa is actually the result of the Democratic Party wanting to get him out of the Health Care vote. Also? Rahm Emanuel once pushed him around naked in a shower.

One of them looked at me and as they would do after, I don’t know, 15 gin and tonics, and goodness only knows how many bottles of champagne, a staff member made an intonation to me that maybe I should be chasing after the bridesmaid and his points were clear and his words were far more colorful than that,” Massa said. “And I grabbed the staff member sitting next to me and said, ‘Well, what I really ought to be doing is fracking you.’ And then [I] tossled the guy’s hair and left, went to my room, because I knew the party was getting to a point where it wasn’t right for me to be there. Now was that inappropriate of me? Absolutely. Am I guilty? Yes.”

Why so much interest into this innocuous event? (The suggestion being this is no bathroom stall scandal!)

“Mine is now the deciding vote on the health care bill and this administration and this House leadership have said, quote-unquote, they will stop at nothing to pass this health care bill, and now they’ve gotten rid of me and it will pass. You connect the dots.”

No doubt President Obama, et at., desperately wish the HCR bill will come down to just one vote when it finally winds its way back to the House. Alas, at the moment a whole lot of House votes likely stand between Obama and his HCR bill, not the least of which is Bart Stupak and his group of 11. Not to mention, Massa represents a fairly conservative district in New York, so if there is a special election the Dems are rather running a risk of getting a proper Republican rather than a more left-leaning Dem. Probably, they just want to stay away from one more imploding politician (we have a whole bunch here in New York at the moment!).

Not content to let that conspiracy lie, Massa opted to throw some Drudge-appealing mud directly at a naked Rahm Emanuel. Because when in doubt become a raving conspiracy theorist….or something. Behold.

“Rahm Emanuel is son of the devil’s spawn, Rep. Eric Massa (D-NY) said. “He is an individual who would sell his mother to get a vote. He would strap his children to the front end of a steam locomotive…I am showering, naked as a jaybird, and here comes Rahm Emanuel, not even with a towel wrapped around his tush, poking his finger in my chest, yelling at me.”

Tomorrow at five: congressman Massa for the full hour. I just spoke with him off air. All Americans need To hear him. Exclusive 2morrow fox

And just like that David Paterson doesn’t look so bad. Audio below.

Related: “Bullcrap! Bullcrap, Sir!”: Glenn Beck Is NOT Tickled By His Interview With Eric Massa