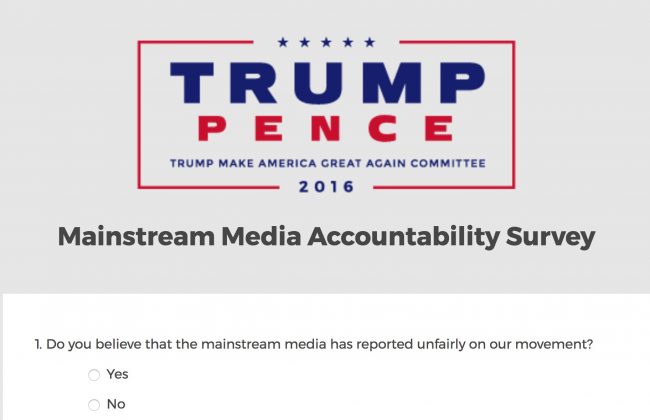 Donald Trump and the GOP released a “Mainstream Media Accountability Poll” that more or less backs up his anti-press press conference from yesterday, even before the results are collected.

Here are a few of the questions.

Trump has a survey on his website about media bias. It would TERRIBLE if we all took it to balance out the results!https://t.co/KNkZXy1QrC pic.twitter.com/SD5dgA7po2

this presidential poll isn’t weird or alarming at all
you can also donate? to the fight? against the media? https://t.co/zNzV3O2P82 pic.twitter.com/5uIkK4IbZB

As you might be able to tell, people are not so happy about how pointedly anti-media the questions are or that after asking them, the survey collects participants’ email addresses then asks for donations. Calls for left-leaning people to take the survey to “balance” out the responses are rampant on Twitter. Some are calling it blatant propaganda or worse.

The President of the United States has an online poll on the press’s coverage of him. It is deranged. Take it. https://t.co/5RQNFx5hew

If you want to take it, the survey is on the GOP’s website — as well as Trump’s.