‘Ex-Gay’ Activist Is Absolutely Certain: Obama, Justices Kennedy & Kagan Are All ‘On The Down Low’
audio

‘Ex-Gay’ Activist Is Absolutely Certain: Obama, Justices Kennedy & Kagan Are All ‘On The Down Low’

'Ex-Gay' Activist Is Certain: Obama, Justices Kennedy & Kagan Are All 'On The Down Low'
Twitter share button 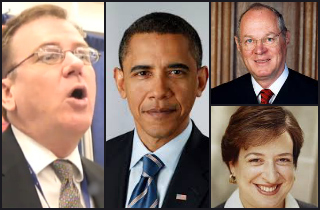 This just in: President Obama, Justice Anthony Kennedy, and Justice Elena Kagan are all “on the down low.” How do we know? Because “ex-gay” activist Greg Quinlan says so.

The president of Parents and Friends of Ex-Gays and Gays (PFOX) told Sons of Liberty Radio his personal story of having once been a supporter of gay rights groups like the Human Rights Campaign. “The Devil” made him do it, he says, but now he is reformed and a proud leader of the “ex-gay” movement.

One can imagine that Quinlan unwittingly finds a lot in common with Arrested Development character Tobias Fünke:

During his tenure volunteering for HRC, Quinlan claims he learned that Justices Kennedy and Kagan are secretly homosexual.

Calling the two Supreme Court justices “black-robed Nazis,” Quinlan said they use the court to “accomodate their own personal predilections,” including Kennedy’s “predilection on the down low.” Kennedy was the justice who wrote the majority opinion in last month’s decision to overturn the Defense of Marriage Act.

President Obama, the “ex-gay” leader added, is also “a down low president.”

Later on during the interview, Quinlan insisted that gay rights groups seek nothing less than “the end of the church” and to “destroy” the United States Constitution. He once again compared the pro-gay movement to Nazis,” asserting that the large groups “use” homosexuals for their benefit, but will turn on them once they achieve power, “just like the Nazis did.”

The group then explored other deep questions, like whether MSNBC host Rachel Maddow would be considered “butch or femme” because only “the butch, masculine types that still participate in homosexuality” will be saved once gay people achieve power.

Listen below to snippets of the conversation, if you can stomach it, as clipped by RightWingWatch: