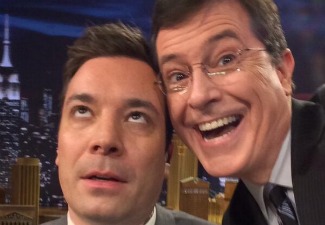 Less than two months after welcoming Jimmy Fallon to 11:30, Stephen Colbert has now been anointed Fallon’s new chief competitor, and in the wake of today’s big news, Colbert’s late night bretheren welcomed him into the fray with open arms.

There was always a sense of rivalry between Jay Leno and David Letterman, but Fallon and Colbert collaborated together in increasingly insane ways over time in a feud that resulted in a pact that they would be best friends forever for six months. Fallon tweeted out his well-wishes to Colbert on the big move.

I'd like to welcome the great @StephenAtHome to network late night and also congratulate him on his new name: Jimmy Colbert.

Congratulations to @StephenAtHome! Could not have happened to a nicer guy

Congratulations to the hugely talented and fragrant and lovely @StephenAtHome on the new gig. Welcome to the CBS funhouse.

Jimmy Kimmel tweeted out some warm sentiments as well.

Congratulations to @StephenAtHome #StephenColbert – a finer or funnier man I do not know.

Arsenio Hall also congratulated Colbert, though he did so in a pretty sarcastic manner.

Even though Dave Letterman wants ME to replace him, @CBS wants Stephen Colbert! Oh well. You go SC! #congratz

There was, of course, the requisite observation or two that it was only a week ago when #CancelColbert was trending.

So I guess this means #CancelColbert worked? After a fashion?

Congratulations to #CancelColbert RT @pkafka: CBS ANNOUNCES STEPHEN COLBERT AS THE NEXT HOST OF “THE LATE SHOW”