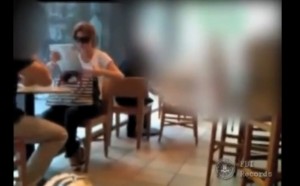 Everyone loves a good spy movie, with shady figures exchanging bags of cash and intelligence files while cautiously looking over their shoulders and asking, “You’re not a cop, are you?” But now, thanks to a Freedom of Information Act request, Americans can watch their favorite sexy real spy, Anna Chapman, do it all on grainy footage. And by “do it all,” we mean, “walk around and sit.”

Watch as she strolls through Macy’s! Be on the edge of your seat as she sits in a coffee shop! Not a fan of Chapman? There’s a supporting cast of spies doing things like rooting through bushes looking for bags, casually brushing up against one another on steps, or — in a time-tested spy move — causing a huge scene at a table in another coffee shop by leaning out of their seats, getting as far away from “under the table” as possible, and exchanging things between two bags. According to The Guardian:

FBI videos of the Russian agents show Chapman … and the other illegals surreptitiously passing information and money as part of their operations, which included the use of spy tools as old as invisible ink and as modern as cryptographic software that hides messages in digital images posted on the internet.

“Surreptitiously” may be a bit of an overstatement for the mission dubbed “Ghost Stories” by the Russians. But the draw here is Chapman, and, as a bonus, the rest of the video shows just how much fun it can be to jump into a lifestyle of spying. Lots of coffee shops, train stations, and the threat of poison ivy as you look for dropped bags.

Prefer to enjoy images of Chapman in happier times? The Washington Post has a slideshow. For everyone else, enjoy the surveillance video below, courtesy of The Guardian: