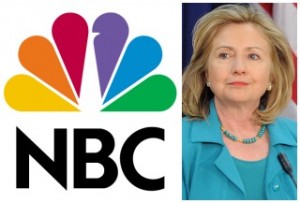 Shortly after CNN announced it was axing its Hillary Clinton documentary project, NBC has now released a statement saying its planned miniseries on the former First Lady, Senator, and Secretary of State has been called off.

NBC has not provided much in the way of explanation (whether this was due to public pressure or failed talks with production studios) save for this brief statement, according to TVNewser.

“After reviewing and prioritizing our slate of movie/mini-series development, we’ve decided that we will no longer continue developing the Hillary Clinton mini-series.”

NBC had previously hinted they wouldn’t be continuing on with the project. The network was in talks with Fox TV Studios to produce the miniseries, but Fox ended up pulling out of negotiations.

Whether or not the timing was planned or merely coincidental, both NBC and CNN ran afoul of the Republican National Committee with their planned Clinton projects, with the RNC voting to strip either network from hosting its debates if the projects were seen through. The projects also got some criticism from the left over concerns CNN and NBC would be too kind to critics of the Clintons in their respective projects.

While there was a lot of critical coverage of the projects in the conservative media, Bill O’Reilly actually called it weeks ago when he predicted neither project would end up getting made.

But now that their Clinton miniseries is officially dead, NBC can get back to other great projects, like bringing The Wizard of Oz to TV and making a sequel to the Bible. I wish I was joking about that one.