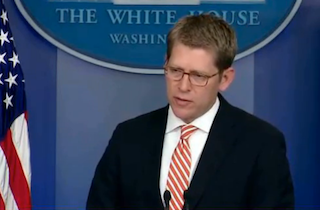 “The president is aware of this,” Carney replied to Henry’s initial question about the case. “The president does not and cannot take a position on an ongoing trial. So I won’t as well.”

In 2003, Henry went on to recall, Obama “voted against a bill that would provide medical care, as I understand, to babies who would be born after a botched abortion like this. Obama didn’t support it then, he added, because “he felt like any doctor in that situation would take care of a child.”

Hearing evidence from the Gosnell trial, he then asked, which suggests at least one doctor did not care for children in that situation, “Is there some legislative solution, or at least a conversation, that needs to happen in Washington?”

Alluding to Carney’s call for “common-sense reform” on guns, Henry asked, “In this case, do we need to be saving lives as well?”

Carney again noted that Henry was relating his question to a case that neither he nor the president could comment on. Obama’s “position on choice is very clear,” he added, noting the principle that abortions should be “safe, legal, and rare.”

Henry tried one more time to get a more substantial answer from the press secretary, asking whether Obama believes there should be some type of reform without restricting abortion rights — such as legislation to protect babies born after a botched abortion procedure.

“You’re asking for hypotheticals about legislation or proposed legislation that I haven’t seen, so it’s hard for me to comment on it,” Carney said.

So now we know the president is “aware.” A for effort, Ed Henry.