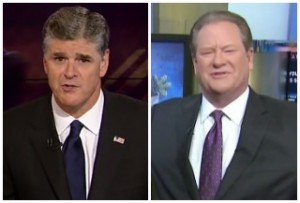 Ed Schultz is not a big fan of Sean Hannity. Twice in this past month Schultz has challenged Hannity to a face-to-face debate on Obamacare. And Hannity has finally responded in a statement provided to Mediaite regarding Schultz’s debate “invitation.”

Schultz devoted the entire first segment of his show Friday to going after Hannity, calling him the “king of cheap shots” and said that he “would sell his absolute soul to defeat President Obama and defeat Obamacare.”

Schultz and his panel last week also went after Hannity for his “ignorance” over Obamacare and sniping at him for his exchange with an Obamacare operator that got her fired. After that incident, Hannity pledged to recoup a year’s salary to the operator.

In his statement, Hannity makes it clear he has no problem engaging in dialogues with liberals, he just doesn’t consider Schultz to be worth his time.

“Over the years, I have had dozens of spirited debates with Rev. Al Sharpton of the same network on radio, TV, including The National Action Network’s annual convention, where The Rev. has shared with me personally that our exchanges are often the highlight of the convention.

While I understand little Eddie desperately needs attention, he unfortunately does not have the intelligence, wit, humor or debating skills of Rev. Sharpton, or somebody like James Carville who I have also publicly debated numerous times.

Too be blunt I really have better things to do with my time than attempt to educate a total buffoon who calls Laura Ingraham horrible names, and publicly states ‘we ought to rip out Dick Cheney’s heart, stomp on it, and shove it back in him.’ Enough said.”