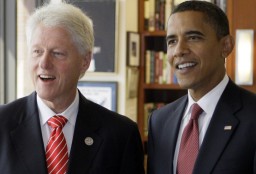 Add this to the list of not great things that have happened to the White House this week.

More than six in ten (61 percent) of all adults see Clinton in a favorable light as compared to 52 percent who say the same of Obama. (Former President George W. Bush is, not surprisingly, at the bottom of that list with 45 percent of people viewing him in a favorable light.)

Obviously, President Obama is subject to a higher level of public criticism merely by dent of the fact he is in charge and, as they say, the buck stops with him. But what’s more interesting to note perhaps is how the public seems to be softening, or even forgetting, the more negative associations many have held with regards to the Clintons over the years. Those associations stuck around long enough to dog Hillary’s entire presidential campaign, however if they now are fading away — as this poll seems to suggest — it may add further grist to the idea that Hillary could make a viable 2012 run.