Glenn Beck Tears Into Middle Schoolers In Bus Video: ‘The Kids In This Video Are Dead Inside’ 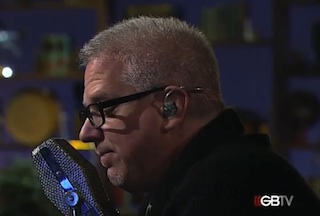 Today on his radio show, Glenn Beck started things off by discussing the horrifying video of a 68-year-old bus monitor being tormented by a group of middle schoolers. While many have focussed on the poor woman, Karen Huff Klein, Beck asked his listeners to focus instead on the children as he saw them as a symbol of every way American society has gone awry. In fact, he went on to wax nostalgic about the wonderful 1950s. Unsurprisingly, I found myself disagreeing with just about every single thing he said.

After playing a clip of the lengthy video, an aghast Beck began to dissect its content and what he thinks it has to say about the country today.

“There’s no way that [the students] would have been brazen enough, nasty enough, callous enough, to continue the onslaught like this on an elderly woman for 10 full minutes in the 1950s. Oh, I know there were problems in the 1950s, but look how we have fixed most of those problems and, at the same time, gone in the opposite direction! Secondly, even if they would have been, the driver would have slammed on his brakes at some point, gotten out of his seat, and administered some old-fashioned ass-whooppin’ with these 12-year-old kids! If not the driver, I do believe there would have been at least a student or two among the 30+ on board who had the guts and decency to stop or at least try to stop it. The kids in this video are dead inside”

Beck then went on to blame every lazy cliche you would expect him to:

“There are a ton of factors that have contributed to this slide. Maybe TV, movie, music, video games that de-sensitize, lack of the nuclear family unit, both parents now outside of the home, no one raising the kids except the government, the schools not being able to have any kind of control…”

And so on and so on including a lengthy talk about how awesome it would be to have prayer in schools again. Yay!

Glenn Beck, like everyone (always white, I wonder why?) who goes on about how great the past was, makes sure to point out that he knows there were “problems” in the 50s. In case you couldn’t tell, this was his way of quickly shutting down anyone who dares point out the…uh…”bullying” that was going on in that period. It’s Beck saying, “Yeah, we all know about the lynchings and whatever. But what about the good stuff?”

So, fine, lets play by his rules. Lets pretend all of those “problems” weren’t happening. I’ll even skip over the utter hypocrisy of someone complaining about the government raising people’s kids while, in the same exact sentence, saying that the schools don’t have any control while complaining about the government raising their kids (Um, you know that public schools are filled with nothing but government employees, right? How on earth). And I’ll also skip over the fact that this is a guy who frequently complains about schools restricting kids’ dietary choices while at the same time saying that bus drivers should be allowed to “whoop” 12-year-old “asses.”

I’ll skip all of those things and focus on his main points. Lets start with the hyperbolic statement that this video proves these kids “are dead inside.”

No. Actually, it proves the exact opposite. These kids are very, very alive inside. In fact, their bodies are going through some of the most profound changes that human beings go through in their lives. That’s part of the reason why they are complete assholes. That’s also the reason why all 12 and 13-year-olds are assholes. And I mean all of them. Not just today, but every single decade ever. Including the wondrous 1950s.

As I wrote in my initial post yesterday, kids in my school busses were just about as shitty as these kids. We just didn’t have cell phones to record with. And, sure, you can complain and say that that’s the 90s which were just as bad as now (the devil’s MTV had existed for like a whole decade!!!), but how about we go a bit further back to when Mitt Romney was viciously bullying kids in school? Yes, that was the 60s, but I’m going to take a wild guess that the 1960s as we know them didn’t reach Romney’s super expensive private school until around the year 1983.

Look, I’m not saying that I don’t like the huge exposure that the problem of bullying has gotten in recent years. I love it. Every single time a young kid learns that there are other kids having a hard time out there just like him or her, then all of the ponderous think pieces in the world have been worth it. What I don’t like, is when people like Beck use these universal issues as some sign that we need to go back to a fictional utopia that NEVER ACTUALLY EXISTED.

Beck asks if our kids have become better in the 50 years since prayer in public schools was abolished. Well, guess what? I’d say they have. And I’ve got some figures to back that up.

Teens beating a black boy to death for looking at a white girl. Down.

Oh, wait. I promised I wouldn’t talk about that. Oops!

Lets focus on one last detail that Beck missed. That detail is the fact that, after the video went viral (something that couldn’t happen in the 1950s), a young man named Max Sidorov decided to create an online fundraiser for the woman in the video despite never having met her (something that couldn’t happen in the 1950s), and complete strangers went to their computers and have, in less than a day, donated more than $200,000. Do I need to point out how difficult that would have been back in Eisenhower days?

So lets stop blaming 2012 for what’s in that video. And lets stop lying about how great the past was. Hooray for the present, God bless the future, and fuck the 1950s.