‘Go F*ck Yourself, You Piece of Sh*t’: GOP Candidate Goes on Tirade Against Reporter
audio

‘Go F*ck Yourself, You Piece of Sh*t’: GOP Candidate Goes on Tirade Against Reporter 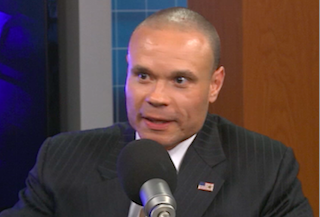 In a phone call with Politico Florida reporter Marc Caputo, Florida Republican congressional candidate Dan Bongino went on a profanity-laced rant, inviting Caputo several times to carry out a sexual act that is not physically possible.

The disagreement began when Bongino trashed a Naples Daily News report that only 6% of donations to his primary campaign against businessman Francis Rooney came from within the district. Caputo asked him what was factually inaccurate about the report, which then led to a Twitter back-and-forth between the two.

Now, before anyone cries foul, Caputo made it perfectly clear during the Twitter argument that he would be recording the call.

The interview began civilly enough, but quickly devolved into insults and mutual accusations of wrongdoing. “Marc listen, you can go f*ck yourself,” Bongino declared halfway through.

But it wasn’t until Caputo accused Bongino of being a carpetbagger who moved from Maryland to Florida to win political office that the former Secret Service agent really let loose. “You’re a real disgusting piece of sh*t. You have no idea why I moved to Florida,” he retorted.

“Hey, shut the f*ck up!” he bellowed when Caputo tried interjecting. “Go f*ck yourself, you piece of sh*t. You don’t know why I moved to Florida, you motherf*ucker! F*cking coward!”

Caputo was clearly amused, laughing throughout the entire tirade. “Oooooh, Dan. You really sound like you need some help,” he condescended.

“F*ck you, f*ck yourself,” he continued. “Wait til I shred your f*cking ass on the radio. Shut the f*ck up.”

Listen above, via Politico.

UPDATE (3:46 PM ET): Bongino is locked in a primary race with Florida businessman Francis Rooney, not Florida Republican Congressman Tom Rooney as this article originally claimed. The error has been corrected.