First, there was the Google Maps glitch that led people to the White House after searching for the “n*gga house.” Now, Google is apologizing again for another horrible glitch that identified pictures of black people as “gorillas.” Who alerted Google to this? A black programmer. Who found pictures of himself.

Jacky Alciné had searched on Google’s Photos app for pictures of him and a friend, who is also black, and took a screenshot that showed the shocking mistake: 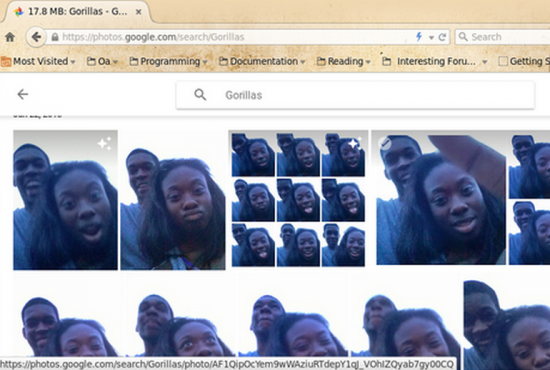 Google engineer Yontan Zunger responded swiftly saying “This is 100% Not OK,” but the first round of fixes still didn’t take.

This took place on Google’s new Photos app, which is supposed to promise “machine-learning smarts to recognize people, places and events.” But it clearly has a lot of kinks to work out. (Racist kinks, which would be a terrible/perfect name for a punk band.) As quickly as it responded to the glitch, Google also issued a formal apology from spokesperson Katie Watson in addition to the initial one:

“We’re appalled and genuinely sorry that this happened. We are taking immediate action to prevent this type of result from appearing. There is still clearly a lot of work to do with automatic image labeling, and we’re looking at how we can prevent these types of mistakes from happening in the future.”

Alciné asked the more important question however: “I understand HOW this happens; the problem is moreso on the WHY.”

It’s probably a good time to mention that a study uncovered a huge disparity between white tech workers and tech workers of different ethnic backgrounds. There is a lot of work to be done after all that apologizing.