GOP Governor Calls For Romney To Release Tax Returns, Then Walks Back Remarks

GOP Governor Calls For Romney To Release Tax Returns, Then Walks Back Remarks 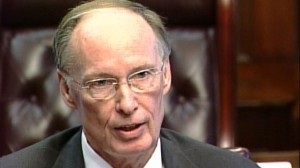 Yesterday Republican governor Robert Bentley called on Mitt Romney to release more years of tax returns and subsequently walked back his remarks, explaining to BuzzFeed that he didn’t mean he wanted Romney specifically to release his records, he just meant every candidate should do it.

RELATED: Rep. Jason Chaffetz’s Advice For Those Asking To See Romney’s Tax Returns: ‘Get Over It’

Bentley was quoted in an Associated Press article yesterday as saying Romney should release his tax returns, according to The Hill.

“If you have things to hide, then maybe you’re doing things wrong… I think you ought to be willing to release everything to the American people,”

Bentley made the remarks while attending the National Governors Association, and later explained to BuzzFeed that he was not calling Romney out in particular on the tax returns front.

“I release my tax returns every year and I just think that everyone should do that. You know, I did not call on him to do that. I just said that’s what I do, and I said I just might be the only public official in Alabama that does that, but I do that every year. I just think it gets an issue behind you when you go ahead and do it. I remember when President Bush did that. I would call on the president to do that also. I just think that it’s just easier to do that and get past that.”