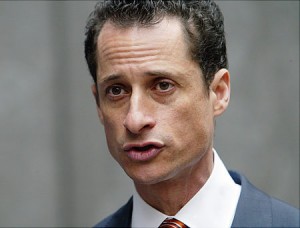 When you think of potential future public servants, does the name Anthony Weiner come to mind? Because the New York Post is exclusively reporting that the congressman, who infamously got busted last year for tweeting out a lewd photo, is considering a reentry into the New York political sphere by entering the race to succeed Michael Bloomberg as the mayor of New York City next year. People close to Weiner told the Post the former congressman is “‘desperate’ to get back into politics.”

Weiner is currently sitting on a $4.5 million war chest, has spoken to former congressional staffers about returning to work with him in a potential mayoral race. In an interview to WNYC last month, Weiner admitted he still has “regrets for the people I’ve let down.” Since the Supreme Court decision on the Affordable Care Act, Weiner has been making the rounds in the media, carefully wading his toes back into the political sphere.

One source stated quite definitively that “in his mind, [Weiner]’s trying to figure out how to run for mayor.” The Post reports that Weiner still plays rent on a campaign office, and if he were to run for public office again, it would have to be soon because “the public match on his campaign funds are due to expire after the 2013 election.

One political consultant summed up Weiner’s problems in a nutshell.

“The general feeling is that you can’t text pictures of your penis to a girl, then lie about it, then get kicked out of the House and then run for mayor right after.”

Of course, if Weiner ends up running and actor Alec Baldwin follows through on his interest in running for mayor next year, that’s going to be a primary race to remember.