Gubenatorial Candidate Spends $35 on Campaign, Gets 22% of Vote
Video

Gubenatorial Candidate Spends $35 on Campaign, Gets 22% of Vote 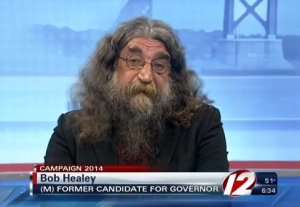 The 2014 midterm elections were the most expensive midterms ever, costing a little over $4 billion dollars for very incremental gains for the Republicans — which is why the story of Bob Healy, who took third in the Rhode Island governor’s race, is so relieving. Healy, see, spent $35 of his own dollars on his campaign — and took 22% of the vote. (No, this is not Ross Perot‘s evil doppelganger.)

“It’s amazing what $35 can do,” Healy, who is not Mandy Patinkin in disguise, told Eyewitness News in Providence. “As I’ve been saying, if we only spent $75, $80, we might’ve won the race.” (Republican Allan Fung came in second with 36%, and Democrat Gina Raimondo won with 40%. We’re comfortable with saying that both spent substantially more than $80.)

Healy’s secret weapon was something that Fung and Raimondo lacked — name-brand recognition. As the Washington Post recapped his illustrious career:

His low-cost billboards — which the former house painter does mostly himself — are usually the most visible in Rhode Island during campaign season. He usually paints them on the side of his friends’ houses.

Watch below via Providence Eyewitness News: