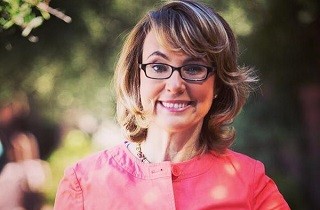 In case you were in a great mood today, let me ruin it for you. First, the pleasant news: former Rep. Gabrielle Giffords was honored this week, the week of her birthday, by having a Navy ship named after her. Tomorrow, Dr. Jill Biden will break a bottle of sparkling wine on the USS Gabrielle Giffords, named in honor of the former congresswoman’s courage after she was shot in the head in 2011.

It’s a great honor, but of course, someone had to ruin it by going on Facebook. Namely, a bunch of guys who like guns. I use the word “guys” loosely because to say what they said, I don’t know if you can qualify as a person anymore.

One user commented, “…why her?…USS Forgot to Duck?”

Another user: “Does that mean CIC will only be partially functional?”

The “CIC”—combat information center—of a fighting ship is its nerve center, colloquially referred to as the ship’s “brain.”

See what they did there? Because Giffords suffered brain damage. Get it?

Most of the posts were about why a ship associated with the military would be named after someone who wants to “take everyone else’s” guns and “hates freedom.” But there were plenty of really — frankly, cheap — comments about how this woman was shot in the head and that was all she ever accomplished. Because leaving a nasty Facebook comment about a survivor of a mass shooting and assassination attempt is the height of success.

Congratulations, internet! You sure came out of this one looking like a winner!