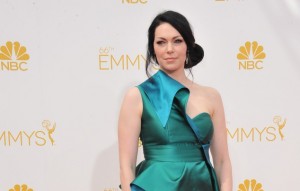 Usually, whenever you read a good bit of news about a favorite show or famous personality, you must always remember that there’s at least double the amount of shit to go with it. Consider the example of Laura Prepon, one of the principal cast members of Netflix’s highly successful Orange Is the New Black.

In December, we noticed that some of the OITNB cast were in attendance at the #MillionMarchNYC protest. Awesome! A positive win for the show’s favor. But flash forward to today’s news feed and you’ll find quotes from Prepon’s bonkers interview in Celebrity Magazine, a glossy by and for members of the Church of Scientology.

“Bonkers” it too gentle a term, however, as Prepon’s candid words about her cult? are seemingly batshit crazy. Pretty much everything in the piece is ripe enough for picking, but we’ve cobbled together some of our favorites below.

Here’s Prepon on her entrance into L. Ron Hubbard‘s take on the world:

So when I first got into Scientology, I did Personal Values and Integrity and then Overcoming Ups and Downs in Life. These courses touched on the observations I was aware of when I was younger. It was right there in black and white. It was amazing, and I felt that finally something was speaking my language. It totally connected with me.

Get any of that? Yeah, me neither. Yet she continues:

Pretty soon after that I got onto the Purification Rundown, and I started moving up the Bridge.

It pretty much leaves all sense of lexical meaningfulness when Prepon discusses her “audit,” one of the many review processes potential Scientologists undergo before achieving the church’s approval:

The auditing has stripped away all of this charge, false ideas, decisions and mis-emotions that were affecting me. I recently had one of my biggest cognitions in a New Era Dianetics session. I spotted this decision I made a long time ago that was affecting me to this day. It was a huge realization. At the time of the incident, you make a postulate as a “pro-survival” decision, you know? Then to spot it years and years later, after peeling away these layers and then—boom, there it is—it’s mind blowing! To think of it just hiding there in my bank, affecting me.

Being that this is an official publication of Scientology, a pattern develops regarding the capitalization of certain words — not to mention the friendly slang reference to Hubbard (“LRH”):

When I was doing my Objectives, I was handling some intense stuff—as everyone who has done Objectives can relate to. I remember talking to my Supervisor about how my auditing was going. I told him the wins were so amazing. I kept pushing through and confronting things. The LRH data he showed me totally changed my viewpoint on auditing. It explained that in session, you’re supposed to turn on things that at times aren’t easy to go through. You’re supposed to be restimulated and uncomfortable at times, because you move through it in session, so that when you are out in the world things happen, you’re not affected. It was like this eureka moment for me. I’d never thought about it like that. And that’s exactly what happened.

But the interview’s primary punchline comes in the form of the mother ship of all quotable quotes. When discussing rejection, Prepon explains:

Another big realization I had in my auditing is that there is a bigger picture. This is my career but it does not define me. I am so much bigger than this career and industry. It’s my job and it’s very important to me, but, when I have huge wins in session, and when you really cognate that you are a thetan and you have a mind and body, and that the MEST universe does not control you—it puts things into perspective. It takes the weight off you and things become very easy.

[When] you really cognate that you are a thetan and you have a mind and body, and that the MEST universe does not control you—it puts things into perspective.

For further clarification (or for evidence that we didn’t make this up), check out the scans made available by @laurapreponpower on Instagram.