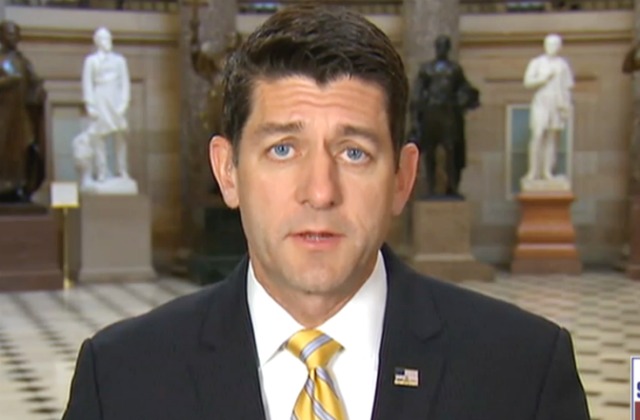 President Trump reverting back to his original comments on Charlottesville set off a wave of Republican responses today, ranging from Republicans slamming him by name to those offering, well, milder criticisms.

Speaker Paul Ryan, for one, did not name the President specifically in his statement:

We must be clear. White supremacy is repulsive. This bigotry is counter to all this country stands for. There can be no moral ambiguity.

@POTUS must stop the moral equivalency! AGAIN, white supremacists were to blame for the violence in #Charlottesville.

One notable reaction came from Congressman Steve Stivers, the chairman of the NRCC:

I don't understand what's so hard about this. White supremacists and Neo-Nazis are evil and shouldn't be defended.

You can see more Republican reactions below:

The organizers of events which inspired & led to #charlottesvilleterroristattack are 100% to blame for a number of reasons. 1/6

They are adherents of an evil ideology which argues certain people are inferior because of race, ethnicity or nation of origin. 2/6

When entire movement built on anger & hatred towards people different than you,it justifies & ultimately leads to violence against them 3/6

These groups today use SAME symbols & same arguments of #Nazi & #KKK, groups responsible for some of worst crimes against humanity ever 4/6

Mr. President,you can't allow #WhiteSupremacists to share only part of blame.They support idea which cost nation & world so much pain 5/6

The #WhiteSupremacy groups will see being assigned only 50% of blame as a win.We can not allow this old evil to be resurrected 6/6

Seems like a good time to re-up these remarks –> https://t.co/TVQEND6gfr

This is simple: we must condemn and marginalize white supremacist groups, not encourage and embolden them.

We are Americans from all walks of life, working towards the American Dream. Nowhere in that dream is there room for https://t.co/MbCbTrITwI

When it comes to white supremacists & neo-nazis, there can be no equivocating: they’re propagators of hate and bigotry. Period.

White supremacy, bigotry & racism have absolutely no place in our society & no one – especially POTUS – should ever tolerate it. Full STMT: pic.twitter.com/dufC1MGWgB

The violence in Charlottesville was caused by racists & hate groups. We must unite against them.

We can't accept excuses for white supremacy & acts of domestic terrorism. We must condemn. Period.

We must speak out clearly against the hatred, racism and white supremacists who descended upon #Charlottesville.

The response to this ideology of hate & bigotry, & the act of domestic terrorism, should be simple & united condemnation without ambiguity.

Saturday's violence and tragic loss of life was a direct consequence of the hateful rhetoric & action from white supremacists demonstrating.

Race-based supremacy movements have no place in our melting pot culture. #Charlottesville

They do not reflect the ideals enshrined in our Constitution that treats and respects every American equally.

We should be abundantly clear. White supremacy, Nazism, and hate have no place in our society. We must condemn it on no uncertain terms.

I was clear about this bigotry & violence over the weekend and I'll repeat it today: We must defeat white supremacy and all forms of hatred. https://t.co/iOaVvE8txs

Blaming "both sides" for #Charlottesville?! No. Back to relativism when dealing with KKK, Nazi sympathizers, white supremacists? Just no.

This is cut-and-dry: White supremacists & neo-Nazis have no place in our society & that should be made unequivocally clear on all levels

Those who march under Nazi flags or with KKK-affiliated groups are not "fine people."

White supremacy and those who embrace it are a disgrace to our nation. There can be no equivocation, no comparison.

POTUS deflected from the fact that a young woman was killed & others were injured by a bigoted follower of the white supremacist movement.