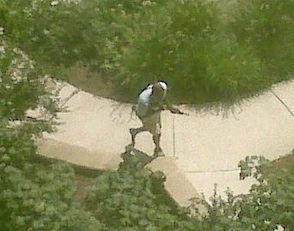 CNN is reporting of a scary situation currently unfolding at the Silver Spring, Maryland offices of the Discovery Channel. Reportedly a police emergency response team is currently responding to reports of a man with a gun and possible explosives at the headquarters, a Maryland, a police spokeswoman said.

A man entered the lobby and may have fired a weapon and declared, Nobody is going anywhere, Montgomery County police told ABC 7’s Brad Bell.

In a phone interview on ABC 7 News and TBD TV, Discovery Communication employee Lisa Lucas said the building is in lockdown, with an unknown number of employees sheltering in offices. Police have established a cordon around the building.

The suspect is an Asian male, police said.

Update: Twitter is awash with rumors that Discovery had been receiving threats lately for engaging in “Eco-Terrorism” from their program Whale Wars, suggesting that the current hostage situation may be a result of that show. Whale Wars is a show that appears on Animal Planet, a channel that is part of the Discovery Network which is described on WikiPedia as a “program that follows Paul Watson, founder of the Sea Shepherd Conservation Society, as he and his crew aboard their various vessels attempt to deter Japanese whaling off the coast of Antarctica. The third season premiered on June 4, 2010.

Update 2: The NY Times Brian Stelter has tweeted out a link to a webpage entitled “Savetheplanetprotest.com.” The screed opens with:

The Discovery Channel MUST broadcast to the world their commitment to save the planet and to do the following IMMEDIATELY:
1. The Discovery Channel and it’s affiliate channels MUST have daily television programs at prime time slots based on Daniel Quinn’s “My Ishmael” pages 207-212 where solutions to save the planet would be done in the same way as the Industrial Revolution was done, by people building on each other’s inventive ideas. Focus must be given on how people can live WITHOUT giving birth to more filthy human children since those new additions continue pollution and are pollution. A game show format contest would be in order. Perhaps also forums of leading scientists who understand and agree with the Malthus-Darwin science and the problem of human overpopulation. Do both. Do all until something WORKS and the natural world starts improving and human civilization building STOPS and is reversed! MAKE IT INTERESTING SO PEOPLE WATCH AND APPLY SOLUTIONS!!!!

2. All programs on Discovery Health-TLC must stop encouraging the birth of any more parasitic human infants and the false heroics behind those actions. In those programs’ places, programs encouraging human sterilization and infertility must be pushed. All former pro-birth programs must now push in the direction of stopping human birth, not encouraging it.

3. All programs promoting War and the technology behind those must cease. There is no sense in advertising weapons of mass-destruction anymore. Instead, talk about ways to disassemble civilization and concentrate the message in finding SOLUTIONS to solving global military mechanized conflict. Again, solutions solutions instead of just repeating the same old wars with newer weapons. Also, keep out the fraudulent peace movements. They are liars and fakes and had no real intention of ending the wars. ALL OF THEM ARE FAKE! On one hand, they claim they want the wars to end, on the other, they are demanding the human population increase. World War II had 2 Billion humans and after that war, the people decided that tripling the population would assure peace. WTF??? STUPIDITY! MORE HUMANS EQUALS MORE WAR!

The full screed can be read here: