Paul Begala To Ari Fleischer: We’ll Give Credit For Surge If Bush Takes Some Blame For Lies
video

Paul Begala To Ari Fleischer: We’ll Give Credit For Surge If Bush Takes Some Blame For Lies 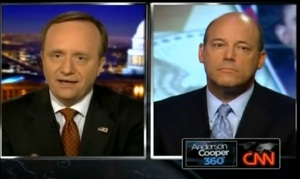 Last night President Obama marked the end of U.S. combat operations in Iraq with a solemn and graceful thank you speech from the oval office. Former Clinton adviser Paul Begala and White House Press Secretary under President Bush Ari Fleischer took the occasion to debate (or re-debate) the many complex and unsettling issues that made the Iraq War such a lightening rod for criticism for both sides of the political aisle.

AC 360 host Anderson Cooper led the discussion (which you can see below) and opened by asking Fleischer what he thought of Obama’s speech. The exchange went something like:

Fleischer: My first thought 7 1/2 years ago i was in the oval office when the president gave a speech committing us to Iraq, and it’s appropriate. Americans don’t like to commit troops abroad. When we do, we want to win and we want to come home. I think president bush is the one because of the surge. 2008, when the shoe thrown at him announcement of the security agreement with the Iraqi government to bring troops home at the end of 2011. The day had to come. I’m glad the day was able to come and President Obama gave a speech where he could thank the troops who also made this possible, who deserve all of the credit for making it possible.

Cooper: Do you think he should have said more about President Bush?

Fleischer: It would have been gracious of him if he mentioned the surge but the problem he has, for President Obama to put President Bush i Iraq and anything good in the same sentence, the democrat base, which doesn’t want to show up in November, so — I wish he was more gracious but it but he’s his own democratic comparative and he followed those tonight.

Aha! So while Fleischer somewhat gracefully claimed that the speech was “appropriate,” he also wished that Obama had mentioned “the surge” – the occupational strategy that many feel was an integral part of the stabilization of the situation of Iraq (a policy that Obama himself was opposed to.) A deft political thrust, that Begala was all to ready to parry:

Cooper: Paul, what do you think about the speech?

Begala: First, he was trying to do three different things say we’re going withdraw from Iraq, surge into Afghanistan, but withdraw from there, too, and I want to pick up on the point about the surge because it is staggering to me. First off, the surge was only necessary because Bush, Dick Cheney, on Donald Rumsfeld went to war with too few troop because he wanted to prove the General Shinseki wrong. That’s why we did it in the first place. Second, it could never have preceding Sunni Awakening. Iraqis themselves had to decide. it wasn’t the American surge that cured it, it was the Sunni Awakening. But I’ll make a deal with President Bush. We’ll give you all of the credit for the surge if you take half of the blame for the lies that got us into the war, by which I mean Iraq — excuse me, Ari, by which i mean —

Begala: Saying Iraq was an imminent threat to America, by saying it was a mushroom cloud it could become a smoking gun, the drones that Saddam supposedly had that would gas America, the connects that they alleged, which were false, between al Qaeda and Aaddam’s regime. So, you know, there was so much they got wrong about this, some of it, just botched and some of it was deeply dishonest and the notion that somehow bush is owed any moment of grace is appalling to the history.

Fleischer fought back by reminding Begala that it was not just Bush, nor the GOP that decided to go to war in Iraq – Begala’s former boss Clinton made the same recommendation based on the same intelligence. And suddenly it was like we were living in 2003 all over again.