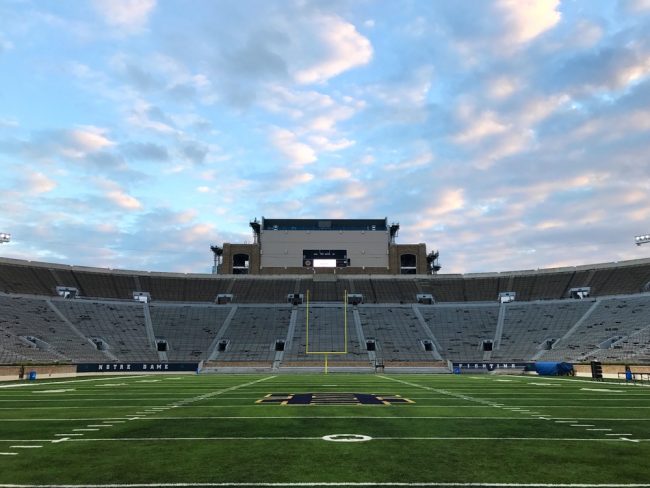 Since 1965, the Bulldogs have only played in the northern half of the U.S. one time — a 2010 meeting with Colorado.

But Georgia made the rare trek north for what figures to be a special showdown — a primetime showdown under the lights in South Bend. It’s Notre Dame vs. Georgia — a unique match-up between two of the most storied programs in college football.

Both teams got the season started off right last week. Notre Dame easily dispatched Temple 49-16 in their kickoff match-up. The Irish put up more than 600 yards of offense against the Owls — with three hundred-yard rushers leading the way. Dual-threat quarterback Brandon Wimbush put up 106 yards on the ground in addition to his 184 in the air in his first Notre Dame start. He figures to have some success against the Bulldogs defense.

Georgia, meanwhile, took care of giant killer Appalachian State 31-10. The defense was solid, holding App State under 300 yards total. But they’ll need to do a much better job offensively. The Irish defense figures to dominate unless Georgia can improve dramatically from their showing a week ago.

Coverage begins at 7:30 p.m. on NBC. Mike Tirico and Doug Flutie have the call. The action will be streamed live on the NBC Sports website, and can also be streamed on mobile devices via the NBC Sports app. The app can be downloaded via Apple’s iTunes Store and the Google Play Store. A cable subscription is required for the free stream.