How to Watch the NHL Winter Classic: Blackhawks vs. Blues Live Stream Online 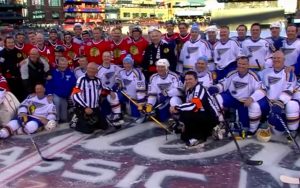 With college football’s big games now being more spread out over a period of several weeks rather than concentrated on New Year’s Day, the NHL has deftly exploited the schedule opening by playing its Winter Classic annually on New Year’s since 2008. (Save for 2013, when the game didn’t take place due to the NHL lockout.) This year, with the holiday falling on a Sunday, the game has been moved up to Monday Jan. 2, a special weekday afternoon treat for hockey fans.

The St. Louis Blues have the honor of hosting the Classic for the first time. They welcome the Chicago Blackhawks in to play at Busch Stadium, home of baseball’s St. Louis Cardinals.

The Blackhawks have actually appeared in the Winter Classic twice before, having failed to win both times. They lost to Detroit at Wrigley Field in 2009, and lost to Washington in 2015. Here, they’ll look to break through against division rival St. Louis.

The puck drops at 1:00 p.m. ET. The game will be broadcast on NBC. Mike Emrick and Eddie Olczyk have the call. NBC will stream the game on its website, or you can use the NBC Sports app to watch on your phone or tablet. That apps can be downloaded from the Apple App Store, Google Play, and the Windows Store. A cable subscription is required for the free stream