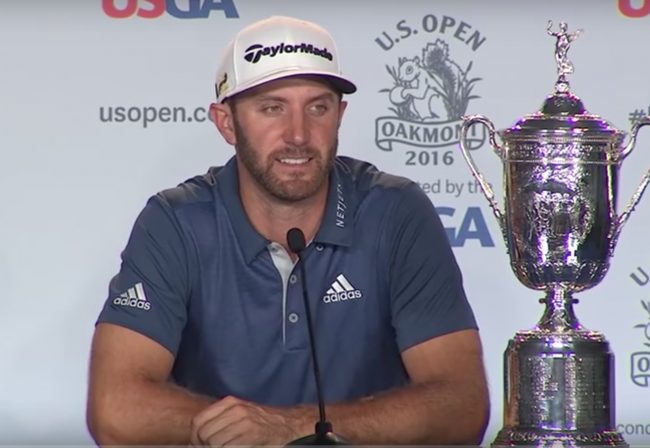 Golf is back in the spotlight this week as the U.S. Open begins Thursday at Erin Hills in Wisconsin.

After his breakthrough 2016 win at Oakmont, Dustin Johnson, pictured above, is the favorite to win again in 2017. It’s his first major of the season as he was forced to miss the Masters due to a back injury he suffered falling down the stairs on the day before the tournament. He was out of action for a month as a result. But he finished in the top 13 in three of the four tournaments he’s entered since. So he is in relatively solid form as he looks to defend his title.

Sergio Garcia also figures to get plenty of attention this week as he tees it up for his first major since his Masters win. The victory was a long time coming for Garcia, who had come tantalizingly close so many times before finally getting the job done. The Masters champ will now look to back up his Green Jacket win by hoisting the U.S. Open trophy.

So often at the U.S. Open, the course is the star. And this week, that figures to be the case as Erin Hills hosts the championship for the first time. It’s a sweeping, visually-arresting layout. But there’s been some grumbling from the players about the length of the fescue rough. The USGA has trimmed it in places, but it still figures to vex many players this week.

Television coverage begins at 11:00 a.m. ET on Fox Sports 1, which will carry the first seven hours, before FOX takes over at 6:00 p.m. ET for the final three hours. There are two streaming options for the Open. The first is Fox Sports Go, which requires a cable subscription. The U.S. Open’s official site offers a viable option for cord cutters, although they won’t have full coverage. That site will have coverage of several featured holes and groupings.