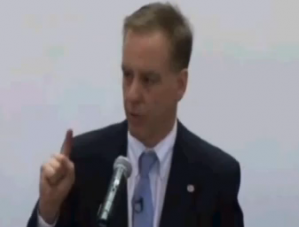 Former Democratic candidate for President Howard Dean unleashed some harsh comments about the Tea Party, Republicans and Fox News, in a recent speech at Carnegie Mellon University in Pennsylvania. Warning that “the right wing desire to run things differently is threatening to the country,” Dean (the self-described “professional media hater”) proves here to be willing to hold nothing back.

Dean, the media critic, offered this assessment of the different cable news channels:

“There’s a difference between Fox and MSNBC. They’re both bias. . . . Bias is not the problem, it’s something that makes us mad, but it’s not the problem. It’s when you become a propaganda outlet. What Fox News says is often not true, and they know it’s not true and they say it anyway. It is not a news organization, it is a very expensive, incredibly well-funded, right-wing propaganda organization.”

By comparison, Dean says “the facts on MSNBC true” and cites the “death panels” as an example of a lie Fox repeated during the healthcare debate. Although he doesn’t hold Sarah Palin responsible for saying “death panels,” since politicians can say whatever they want, he is unwilling to forgive Fox for repeating it. As for the Tea Party, he alleges they are “going off the deep end” because its members are angry they are all over 55, white and shrinking in size. With such a passionate speech, some might not have been surprised if Dean ended it with his infamous “Dean Scream,” yet he admits the coverage of that incident contributes to some of his anger towards the media.

Watch the clip of Dean’s speech below: