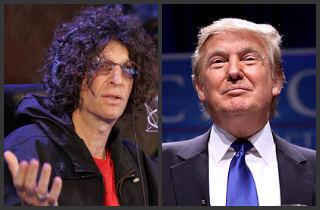 While appearing on Howard Stern‘s radio show last week, famed businessman Donald Trump asserted that he is pro-life, opposed to same-sex marriage, and adores Sarah Palin — all of which prompted an incredulous Stern to challenge whether the mogul actually believes any of that.

“Are you really anti-abortion?” Stern asked. “I know you’re not. There’s no way.”

“Is it a priority for me? Because my priority has always been China and jobs,” Trump explained. “But obviously with passes like rape.” He added that GOP Senate candidate Richard Mourdock was “crazy” for suggesting pregnancy from rape is a gift from God.

Unwilling to believe Trump is actually that anti-abortion, Stern pressed on: “I know you. There is no way that you, personally, are against abortion. You know there’s too many motherfuckers around here, out of their minds. They’ve got people having babies, they can’t take care of them. … Thank God there’s abortion. I know you believe it.”

Moving on to Trump’s “anti-gay marriage” position, Stern said, “If I was alone in a room with you, and you and I were just having a drink, I don’t think you care about gay marriage. I think you’re all for it. I know you. You’re for people being happy.”

After discussing their mutual friend George Takei‘s homosexual relationship, Stern demanded Trump “go on the record” and come out for gay marriage. Trump refused. When Quivers asked him how gay marriage affects the overall institution, Trump wavered, mostly responding with poll figures and overtures to how “public opinion is changing.”

Stern then tried to get Trump’s true feelings about a certain ex-Alaskan Governor and Fox News contributor: “You think Sarah Palin’s an idiot, don’t you?”