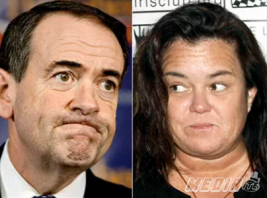 Is this Mike Huckabee attempting to position himself as the voice of GOP reason heading in to 2012, or merely have his political cake and eat it too? Huckabee appeared on Rosie O’Donnell’s Sirius-XM radio show over the weekend and perhaps not surprisingly talk turned to gay marriage and same sex adoption.

Huckabee, a former pastor, is against gay marriage, though gently so…or at least that is what he’d have us believe if this exchange is any measure. During the appearance, Huckabee fended off criticisms from O’Donnell telling her that “I have great respect for you. I respect your choices. And I respect the choices that people make that aren’t my choices.” Though not enough to actually support gay marriage, as Rosie points out, or more to the point, support laws allowing same sex couples to adopt. But still, he feels bad about making Rosie sad.

HUCKABEE: Well, I certainly don’t intend to disparage you as a person.

ROSIE: It hurts. But Mike, it hurts.

HUCKABEE: And that’s not my intention, Rosie. I have great respect for you. I respect your choices. And I respect the choices that people make that aren’t my choices. I think it’s a matter of when people say that I have to somehow accept all values and all view points as the same as mine. I don’t. That’s what we have in our culture, the capacity say that we disagree.

ROSIE: Right, but you’re trying to legally discriminate against my ability to parent in your state. You’re supporting legally preventing me from the same rights as my sister, who is heterosexual.

HUCKABEE: Well, I think if what you’re asking me, do I believe that all people who adhere to a Biblical practice of one man, one woman for life, not only creating the next generation but training their replacements – that’s going to still for me be the ideal relationship.

Fairly tame stuff, all things considered — even more so when you listen to the audio. One wonders if Huckabee would take this same line on a show like Limbaugh’s (I suspect, yes). Either way, sounds to me like Huckabee is weighing his 2012 chances as a GOP contender that does not socially polarize. Audio of the exchange below.