‘I Can See Russia From My House’: A Year of Sarah Palin, The Video Highlights
slideshow

‘I Can See Russia From My House’: A Year of Sarah Palin, The Video Highlights 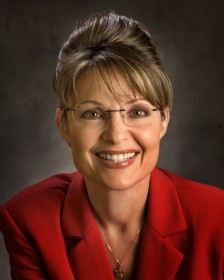 What a difference a year makes. A year ago Thursday, five days after being tapped by John McCain to be his VP running mate, Sarah Palin made her honest-to-goodness public debut giving the keynote speech on day three of the GOP convention in St. Paul. It was, by any measure, a good speech, and a great debut. It also marked the world’s first introduction to Bristol, Trig, “first dude” Todd, Levi, and the rest of the family von Palin. Oh those happy, hazy, days.

Twelve months later it’s hard to remember a time when Palin wasn’t part of our media, entertainment, and political landscape, dontchya know! Here is a look at the video highlights from the year of Palin.

August 29, 2008 – Senator John McCain celebrates his birthday by introducing Sarah Palin as the running mate “who can best help shake up Washington.” Be careful what you wish for!

NEXT: Palin Makes Her Convention Debut