'I'm Not Getting Why He's Tweeting This Out!': Carol Costello Stunned by Trump's Voter Fraud Tweet
Video

‘I’m Not Getting Why He’s Tweeting This Out!’: CNN Anchor Stunned by Trump’s Voter Fraud Tweet 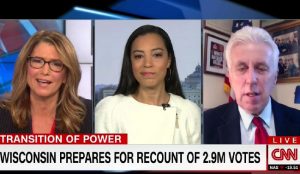 During a discussion this morning on CNN, anchor Carol Costello just couldn’t understand why President-elect Donald Trump was promoting voter fraud conspiracies on his Twitter account, especially considering that he’d won the election this month.

The segment, featuring CNN commentators Angela Rye and Jeffrey Lord, was focused on the recount in Wisconsin and how it could create greater political divisions in the country. Rye mentioned that Hillary Clinton is up by 2.2 million votes nationally and that the combined total that Trump won by in Wisconsin, Michigan and Pennsylvania was around 100,000. Rye also brought up that Trump was pushing conspiracy theories now on Twitter.

This prompted Costello to address the Trump-supporting Lord and ask why Trump is bringing up something that no one is talking about when it comes to voter fraud.

“This is what Angela is talking about,” Costello said. “This tweet from the President-elect — and it’s baseless.”

“It’s like, what,” the anchor exclaimed. “It’s because no one is saying anything about voter fraud in Virginia, New Hampshire and California. He won! He won the election! Like, I’m not getting why he’s tweeting this out!”

Lord could only reply you’d “have to ask him” and proceeded to talk about close vote margins in states Clinton won and perhaps we should call for recounts in them. After he said the election was over, Costello said she agreed with him and once again wondered why Trump was “prolonging things.”