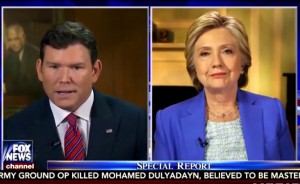 In an interview segment aired Wednesday evening, Fox’s Bret Baier asked Hillary Clinton how her economic policy would differ from President Obama’s. Clinton delivered a monologue, that despite its length and breadth of talking points, failed to actually answer the question.

“Well, I think that 76 months of job creation is a good start,” Clinton said haltingly.

“Well it’s just not different. What specifically would you do differently than the Obama administration?”

Here Clinton began by arguing that America had gotten out of the “big ditch,” but also that a lot of people “hadn’t recovered.” She proceeded to cite the need for “a big infrastructure plan,” and blamed Republicans in Congress for blocking “the kind of investments in infrastructure that we’ve been doing literally from the beginning of the republic.” Specifically, she was enthusiastic about repairing “our roads, our bridges, our tunnels, our ports, our airports, our water systems.”

“Manufacturing jobs,” she added, were also vital, and she would incentivize the return of such jobs. Baier did not interrupt.

As Baier tried and failed to interject, she continued, “And finally we’ve got to combat climate change and think we do that with clean, renewable energy jobs. I have a specific set of proposals that I think would make a big difference.”

“That will be different than the Obama administration,” Baier deadpanned, and he moved on.