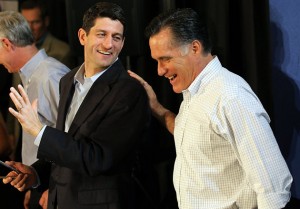 With Paul Ryan being best known, we’d confidently wager, for his budget plan, the question now arises of whether Mitt Romney will fold Ryan’s ideas into his own campaign or any future policies he may pursue. Well, we seem to already have our answer: Nope, not likely.

ABC News obtained a set of internal talking points produced by Romney’s campaign — talking points that make specific mention of Ryan’s budget plan and how the campaign will or will not promote it going forward, all part of the memo’s list of responses to anticipated questions and criticism from Obama’s re-election campaign.

Here’s what it says on the topic of Ryan’s budget:

Gov. Romney applauds Paul Ryan for going in the right direction with his budget and as president he will be putting together his own plan for cutting the deficit and putting the budget on a path to balance.

The full memo appears below, via ABC News.

* First and foremost, Mitt Romney chose Paul Ryan because he meets the threshold test of being able to step in as Commander in Chief should he need to assume the responsibility.

* Second, we all know that jobs and the economy is the number one issue to voters, and Paul Ryan understands the need for pro-growth economic policies and that massive debt is a drag on job creation. He brings energy and ideas of how to reform spending and bring about a balanced budget.

* Paul Ryan possesses detailed knowledge of the federal budget. Under President Obama we have a record national debt, an unprecedented credit rating downgrade, and an utter failure to save entitlement programs for future generations.

* The Romney-Ryan ticket will continue to put forward idea after idea on how to grow the economy and get spending under control. We are happy to compare our understanding and knowledge with President Obama’s failed record on jobs and financial control any day. Mitt Romney and Paul Ryan have proven records of solving problems, compared to this Administration’s failed record.

* We all know that President Obama will continue to run a fear and smear campaign. Mitt Romney and Paul Ryan bring new ideas about creating jobs and controlling the budget.

* President Obama’s campaign has accused Mitt Romney of committing crimes and killing people, and now they are making false charges against Paul Ryan. They have lost all credibility.

Questions and Answers About The Romney/Ryan Ticket:

1) Does this mean Mitt Romney is adopting the Paul Ryan plan?

* Gov. Romney applauds Paul Ryan for going in the right direction with his budget, and as president he will be putting together his own plan for cutting the deficit and putting the budget on a path to balance.

* Romney’s administration will go through the budget line by line and ask two questions: Can we afford it? And, if not, should we borrow money from China to pay for it?

* Mitt Romney will start with the easiest cut of all: Obamacare, a trillion-dollar entitlement we don’t want and can’t afford.

* Mitt Romney also laid out commonsense reforms that will make good on our promises to today’s seniors and save Social Security and Medicare for future generations.

2) Mitt Romney and Paul Ryan have different views on some policy areas – like Medicare spending, entitlement reform, labor, etc. – do you think those differences are going to hurt or help?

* Of course they aren’t going to have the same view on every issue. But they both share the view that this election is a choice about two fundamentally different paths for this country. President Obama has taken America down a path of debt and decline. Romney and Ryan believe in a path for America that leads to more jobs, less debt and smaller government. So, while you might find an issue or two where they might not agree, they are in complete agreement on the direction that they want to lead America.

3) Do you worry that Paul Ryan’s controversial Medicare plan will hurt the campaign with independents?

* No. President Obama is the one who should be worried, because he has cut $700 BILLION from Medicare to pay for Obamacare, and put in place a panel of Washington bureaucrats to make decisions about what kind of care seniors will receive under Medicare. Mitt Romney and Paul Ryan have a bipartisan plan to strengthen Medicare by giving future seniors the choice between traditional Medicare and a variety of private plans. They are committed to ensuring that Medicare remains strong, not just for today’s seniors, but for tomorrow’s seniors as well.

4) Paul Ryan doesn’t have military experience. Does that hurt?

* The ticket is no different that Obama and Biden. Mitt Romney and Paul Ryan both respect members of our military who sacrifice so much to defend our freedoms.

* They share the view that America’s leadership position in the world is based on a robust national defense, strengthened relationships with our allies and a philosophy of peace through strength.

* The recent recession is not the first time that America has suffered from a bad economy, but policy decisions made by President Obama made the situation worse.

* After three and a half years of struggling in the Obama economy, middle-class families need more jobs and more take-home pay. Mitt Romney’s “Plan for a Stronger Middle Class” will help restore America as the best place in the world to find a job, start a business, or hire a worker.

* In his first term as president, Mitt Romney’s plan will lead to a recovery that creates 12 million jobs and grows the economy on average by 4% per year.

* His plan will work toward energy independence, ensure middle-class Americans have the skills to succeed, pursue trade that works for America, cut the deficit, and champion small business.

As President, Mitt Romney Will:

* Encourage job creation, once again making America the best place in the world to start a business, invest capital, and grow

* Increase domestic energy production and eliminate job-killing regulations, so that energy will be both affordable and more reliable

* Give every family access to a great school, quality teachers, and affordable, effective higher-education options

* 23 million Americans are struggling for work and we’ve endured 41 straight months of unemployment above 8 percent.

* For those lucky enough to have jobs, the median income has fallen by $4,300 since he took office, and wages have declined in the past year.

* The average price per gallon of gas is nearly twice as high as it was when President Obama took office.

* Half of recent graduates can’t find jobs that match their skill sets.

* America has suffered through four trillion-dollar deficits as President Obama broke his promise to cut the deficit in half by the end of his first term.

Under President Obama, Deficit Spending Is Out Of Control:

* President Obama promised he would “go through the federal budget line by line, eliminating programs that no longer work and making the ones we do need work better and cost less, because we cannot meet 21st-century challenges with a 20th-century bureaucracy.”

* President Obama has added more than $5 trillion to the national debt.

* The real cost of Obamacare is still unknown, and the president’s own budget projects that total indebtedness will rise to $25.9 trillion by the end of 2022.

* Each American household’s share of government debt and unfunded liabilities has reached $520,000 under this president, a debt that will be passed on to our children and grandchildren.

Governor Romney Has A Plan For Reducing The Deficit:

* Lower federal spending to 20 percent of GDP within four years’ time – down from the 24.3 percent today.

* Roll back discretionary spending levels to where Barack Obama found them in 2009.

* Halt the expansion of government and repeal Obamacare.