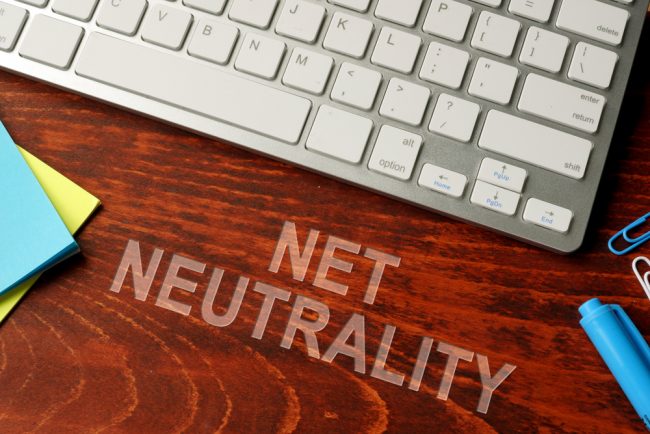 In a 3-2 split, the FCC voted on Thursday to repeal Net Neutrality — a series of regulations adopted during President Barack Obama‘s administration which prohibited Internet service providers from favoring certain websites, and possibly charging more to access other websites.

FCC Chairman Ajit Pai defended the move in a speech prior to the vote.

“We are helping consumers and promoting competition,” Pai said, according to The New York Times. “Broadband providers will have more incentive to build networks, especially to underserved areas.”

But much of Twitter was in panic mode after the vote was announced. Here’s a sampling of the reaction from politicians, pundits, and others.

#NetNeutrality is the latest decision by the Trump administration in an effort to systematically repeal and destroy EVERYTHING we achieved over the last eight years. I’m concerned about any policy that could harm consumer access to the internet.

Three billboards, all telling the FCC to go fuck themselves. https://t.co/V6p5Nw9iPE

Here's to hoping Ajit Pai ends up in a really, really, really slow lane from now on. I'm talking 14.4K modem speed. If a #NetNeutrality supporter ends up being promoted to just the right gig at an ISP, look out, Mr. Pai. (screechy modem sound)

What we have come to know by this move from the FCC is that @AjitPaiFCC is a rogue player. He has acted against the will of a major majority of the American people, left, right and center. He has financial conflicts of interest. He has flouted due process. He’s lost credibility. https://t.co/LgpBLBr9Yy

I want to see statutory protection, the best protection we could possibly get for #netneutrality If I could, I'd like to see constitutional protection for #NetNeutrality I want to make sure that nobody messes with your internet and I feel very strongly about that.

Today’s rollback of #NetNeutrality is a brazen betrayal of American consumers, innovators, students, and entrepreneurs – all of whom will suffer tremendously without a free and open internet.

This is an egregious attack on our democracy. The end of #NetNeutrality protections means that the internet will be for sale to the highest bidder. When our democratic institutions are already in peril, we must do everything we can to stop this decision from taking effect. https://t.co/8GGrJFMdrU

I will sue to stop the FCC’s illegal rollback of #netneutrality. New Yorkers and all Americans deserve a free and open internet. pic.twitter.com/BNW7TDsp4z

Hey @MerriamWebster @OxfordWords @Dictionarycom when someone searches for the definition of “fuckface” can you just link to this: pic.twitter.com/95xwyBvQ6m

We’re disappointed in the decision to gut #NetNeutrality protections that ushered in an unprecedented era of innovation, creativity & civic engagement. This is the beginning of a longer legal battle. Netflix stands w/ innovators, large & small, to oppose this misguided FCC order.

Trump's FCC just voted to end #NetNeutrality consumer protections that benefit everyday Americans. Nothing they say about looking out for you should ever be believed

I was disappointed in the @FCC vote to repeal #NetNeutrality today. People have benefited from a free and open internet and now the FCC has reneged those benefits from all Americans. https://t.co/RwCs7uPNpw

Trump’s hand-picked FCC chairman and the Republican majority on the FCC just voted to overturn #netneutrality, siding with multinational corporations and big business over the interests of the American people. Shame on them. https://t.co/VxApGi8IOJ