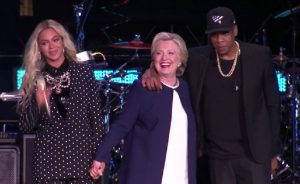 Blacks, who normally vote Democrat as a race, just aren’t going for white Hillary Clinton like they did for black President Barack Obama.

Early voting indicates that black turnout for the doyenne of the Democrat party is very low, trailing the commitment blacks had in voting for Obama in 2008 and 2012, mainly because of his race. It’s worth noting that minorities love early voting, which can extend over 30 days in some states, and Democrats are always pushing for it (which — by the way — introduces the potential for voter fraud).

Like Democrats do every four years, Hillary thought she could neglect “the blacks,” and still win their vote. But it isn’t turning out to be that easy for the white lady presidential nominee.

So what does Hillary’s campaign do? Naturally, enlist Jay-Z and Beyoncé to hold a race-baiting, get-out-the-black vote concert in Cleveland, Ohio. Dressed in a pantsuit, Beyoncé got down with her backup dancers also clad in Hillary’s mant-suit, and sang some songs.

“Eight years ago, I was so inspired to know that my nephew, a young black child, could grow up knowing his dreams could be realized by witnessing a black president in office. And now, we have the opportunity to create more change. I want my daughter to grow up seeing a woman lead our country,” Beyoncé exclaimed to the crowd.

It seems Beyoncé wants her daughter to look up to a woman who is the first presidential candidate to be under FBI investigation.

The celebrity hijinks didn’t stop there; Jay-Z dropped some rhymes at the Hillary concert that were laced with profanity of the highly vulgar variety.

He repeatedly used the n-word and dropped the f-bomb while performing ‘F—WithMeYouKnowIGotIt’ and ‘Dirt off Your Shoulder.’

From Jay-Z’s concert on Friday:

Grandmother, mom, and Democrat presidential candidate Hillary Clinton smiled and clapped with delight as she watched the concert. Standing on stage with the two black superstars, Hillary told the crowd to “take this energy with you.” The energy of thugs and pimps?

You can smell the desperation oozing from Hillary’s entourage with that stunt. I’m surprised she didn’t give away bottles of hot sauce to the black concertgoers in Cleveland. When was the last time anyone saw Hillary with this many black people in her entire career?

Helping Hillary with her black problem, Obama hit the campaign trail in North Carolina, where black early voting is down 7% from 2012. Talking to blacks like they’re children who need to be told how to vote, Obama lied that Donald Trump hates women and minorities.

It’s a close race because Americans, especially blacks, don’t like or trust Hillary Clinton to be president.

“If you accepted the support of Klan sympathizers, if you don’t denounce them right away because you’re not sure, well that’s what you’re gonna do once you’re in office,” Obama said.

Trump didn’t welcome support from white nationalists. Hillary actively courts black-lives-matter activists, many of whom hate white people and advocate for a return to segregation on college campuses.

There’s a reason why Democrats like Hillary don’t hold concerts to win over the white vote: because it wouldn’t work. Whites would laugh at such nonsense, because they are a politically diverse voting bloc and don’t automatically concede their vote to one party. When will blacks start thinking for themselves politically, instead of renting out their brains to black celebrities and a black president to tell them how to vote?