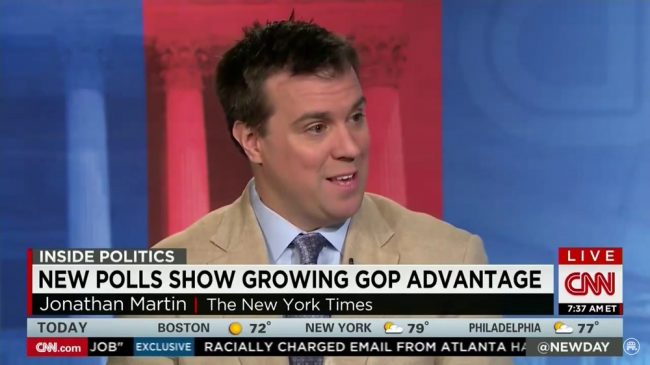 Whitney Bermes, the courts reporter for the Bozeman Chronicle in Montana, accused Jonathan Martin of the New York Times of using her photo of Republican congressional candidate Greg Gianforte‘s assault citation without attribution.

The Washington Examiner spotlighted the controversy in a Thursday write-up. Bermes posted the photo to her Twitter account on Thursday morning. Forty-four minutes later, Martin Tweeted a screengrab of the same citation.

A copy of Greg Gianforte’s citation. There is no affidavit with it. #mtal pic.twitter.com/oP6k7CsTZz

Bermes called out the New York Times journalist less than a half hour later. Martin denied the charge.

@wabermes nope. had no idea you posted.

@jmartNYT Look at those pics side by side. They are the exact same. Same piece of paper redacting personal information, same shadow. That’s my photo.

The online editor of the Chronicle, Michael Becker, replied to the the Times journalist by posting a side-by-side comparison of the two images.

Other Twitter users chimed in on the spat between the journalists, with the majority siding with Bermes.

@jmartNYT Still no explanation for why you didn’t credit the local reporter for the content you lifted?

@jmartNYT @GregForMontana Similarly, I’ve “OBTAINED” a free sub to the NYT by clicking on the RSS symbol in my URL window when your paywall interstitial pops up! ???

@jmartNYT @GregForMontana You mean you obtained the photo from the Twitter account of our reporter @wabermes? Who took the photo in our newsroom?

@jmartNYT The correct response was to apologise and give credit. By lying you’ve destroyed any credibility you may have had. @wabermes