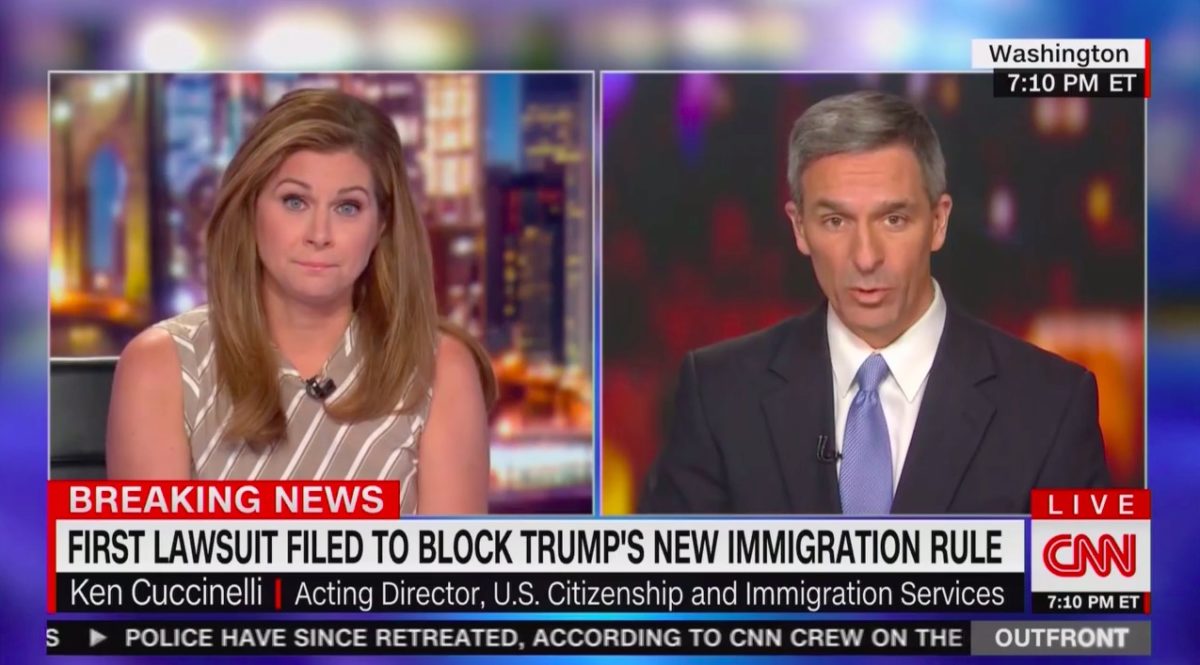 During a segment with CNN’s Erin Burnett, President Donald Trump’s acting director of U.S. Citizenship and Immigration Services Ken Cuccinelli, claimed that Emma Lazarus’ empathetic poem on the Statue of Liberty was about “people coming from Europe” and Twitter erupted in outrage.

Following up on his comments from earlier in the day, the CNN host asked: “What do you think America stands for?” Cuccinelli’s response: “Well, of course, that poem was referring back to people coming from Europe, where they had class-based societies where people were considered ‘wretched’ if they weren’t in the right class.”

This attempt by a Trump immigration official to demographically narrow the promise and hope of America to refugees from just one continent — populated by mostly Caucasian people — sparked immediate outrage online.

Cuccinelli: That statue of liberty poem was about “people coming from Europe.” pic.twitter.com/nrDcUGJsU3

In case you think racism is a fringe thing this guy is the acting head of U.S. Citizenship and Immigration Services, not some random Fox News personality. https://t.co/XByl3dkIlh

This administration finally admitted what we’ve known all along: They think the Statue of Liberty only applies to white people. https://t.co/kTLl50yCmw

in case you’re *still* not sure if Ken Cuccinelli’s racist, he’s also:

– named Steve King as one of his “very favorite congressmen”

– backed invoking “war powers” against the “invasion” of migrants to deny them due process https://t.co/9Bk52k6nvb

Well there you go… https://t.co/2LjYCZLyyS

I am ashamed that #KenCuccinelli is a Virginian. Our former Attorney General. He is cruel. Callous. And the face of the new GOP under @realDonaldTrump it’s deplorable. Oh, wait… https://t.co/EarvInq873

quiet part so loud it registers on the richter scale https://t.co/PMQBC11ohs

he said the quiet part out loud https://t.co/cpaaygZ3sa

Heeeeeyyy… this crowd is just made up of off-the-rack, regular-ass racist jerks. Way too much energy is devoted to making up reasons to think there’s some other explanation. https://t.co/HaNDfxjqrF

Wait, Cuccinnelli actually found a way to get more racist and xenophobic from the morning quote this evening?! https://t.co/aqMytpzvPc

They are telling you they want the country to only be white. How much clearer could this be? https://t.co/IDK2uQnGGJ

Just when you think it can’t get any worse… https://t.co/o1lTtj6DQz

Trump is this close to making Cuccinelli veep over Pence https://t.co/RWvjxVj5FQ

Not even trying to hide racism. Appalling. https://t.co/T6X3CQRoyz

Some folks also noted the irony that CNN once paid Cucinelli to be a contributor on its network.

There are lots of great people at CNN. Lots of them. But it is worth noting that network execs thought Ken Cuccinelli’s insight was so valuable that they paid him for it. (Probably at a salary that could’ve paid for another reporter or producer.) https://t.co/Gb4reNzdr9

Ken Cuccinelli was a man CNN deemed worthy of a paid contributor role at the network.

However, at least one media figure online felt like Cuccinelli’s comments were taken out of context.

The context seems to be completely cut off here — he goes into talking about class stratification of Europe and some kind of argument about merit, not Europeanness or whatever https://t.co/LgaOuS7hx3