Kim Davis’ Lawyers Defend Meeting with Pope: We Never Said It Was Endorsement 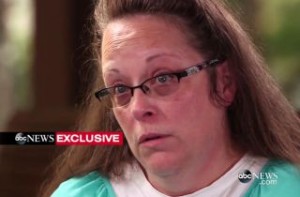 Kim Davis‘ lawyers at Liberty Counsel are defending Kim Davis‘ meeting with the Pope and saying they never actually considered it an “endorsement” to begin with.

The revelation of the Pope’s meeting with Davis was met with widespread shock in the past few days, which prompted the Vatican to offer a statement about her audience with the Pope. New reports indicate that Francis held a private reception with a gay former student and his family the day before, and that the meeting with Davis “should not be considered a form of support of her position in all of its particular and complex aspects”:

Such brief greetings occur on all papal visits and are due to the Pope’s characteristic kindness and availability. The only real audience granted by the Pope at the Nunciature was with one of his former students and his family.

Despite spokesman Federico Lombardi‘s “sense of regret” following the meeting, Davis’ camp released a statement today to push back at the idea that Holy See’s invitation was unsolicited.

“Neither Kim Davis nor Liberty Counsel ever said the meeting was an endorsement of her legal case,” wrote firm founder, Mat Staver. “Rather, the meeting was a pastoral meeting to encourage Kim Davis in which Pope Francis thanked her for her courage and told her to ‘Stay strong.'”

Lombardi also reportedly said that Davis was one of “several dozens” greeted at the embassy, but the Liberty Counsel denied that other members of the public were present, saying “we would not have been able to keep her visit secret.” Mike Huckabee, who has vigorously defended Davis in the past, also gave an interview with Steve Malzberg, where he insisted “[There was] no one but she, her husband and the pope and one of his personnel… He affirmed with her, her right to religious liberty.”