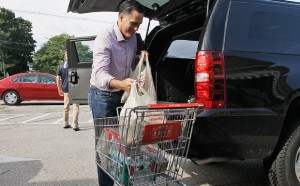 Little something-something about me: I love learning about different faiths, particularly those that seem “exotic” compared to my own Roman Catholicism. Also — as someone whose faith is pretty often misunderstood or outright ridiculed (“Zombie Jesus” was only marginally funny the first 17,000 times I heard it) — I’m interested in learning how the media and popular culture represent different religions and their adherents. Enter the LDS Church, a religion that has captured the popular imagination (see: Big Love and that one TLC show I refuse to watch because it seems to consist solely of sister wives sobbing), the religion of our Republican presidential nominee, and a faith that seems foreign or shrouded in mystery to many. For example: Can Mormons drink caffeine? Are Mormons permitted to drink soda? HOW CAN THEY COPE WITHOUT IT?!

Well, as it says in the Bible, “Ask, and it shall be given you.” From the Salt Lake Tribune:

On Wednesday (Aug. 29), the LDS church posted a statement on its website saying that “the church does not prohibit the use of caffeine” and that the faith’s health-code reference to “hot drinks” “does not go beyond (tea and coffee).”

A day later, the website wording was slightly softened, saying only that “the church revelation spelling out health practices … does not mention the use of caffeine.”

The religion’s founder, Joseph Smith, gave an edict barring alcohol, tobacco and “hot drinks,” later defined as tea and coffee. And part of the confusion surrounding the consumption of caffeine — a confusion that even extends to Church members — stems from that the Church-owned Brigham Young University doesn’t sell soda or other caffeinated beverages, although other LDS institutions do, and it is ultimately up to individual Church members to determine whether they wish to consume soda.