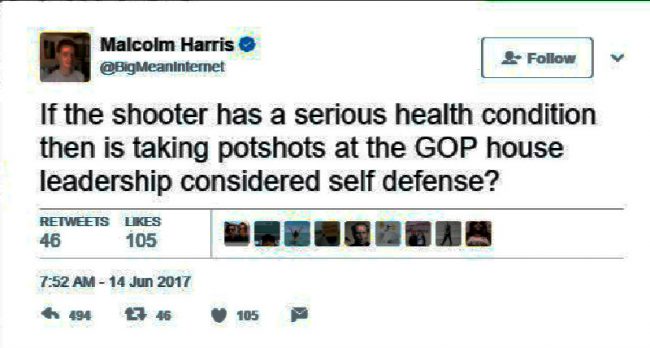 Piggybacking off a post earlier which showcased the worst of right wing Twitter in the immediate aftermath of Wednesday morning’s shooting at a Congressional baseball practice in Alexandria, VA, we thought we’d take equal time to spotlight the worst of left wing Twitter’s reaction to the attack.

it’s time for liberals to go after the Heller decision just like conservatives go after Roe. Settled law? So fucking what. #guncontrolnow

Middle aged white man with a gun. Wonder if the GOP will take a different stance on #GunControl now? Nahhhhhh. https://t.co/ng5jI0GT8S

So Rep. Steve Scalise, who once spoke at a white supremacist event sponsored by David Duke (google it) was SHOT today in Alexandria.

If the shooter has a serious health condition then is taking potshots at the GOP house leadership considered self defense?

Opposing sensible gun control laws on behalf of the NRA is all fun and games until you’re shot in the face.

Don’t you know it’s in bad taste to point out that a congressman who was shot at is an #NRA poster child? You monsters! #scalise