Let Me Be Clear! President Obama Tends To Repeat Himself 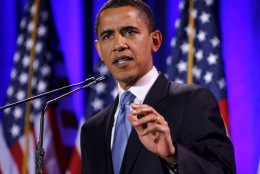 Ever listen to President Obama make a speech (all things considered, the answer is probably yes) and think “wow, this sound very familiar”? Make no mistake about it! It’s not your imagination! According to the AP the president has a few favorite phrases.

“Make no mistake. Change isn’t easy. It won’t happen overnight. There will be setbacks and false starts.”

Did you read that and immediately hear the president’s voice in your head? Anticipate some soaring, soothing rhetoric? Prepare for a station break? Understandably so. You’ve probably heard them a lot this last year or so. Sort of like the presidential equivalent to rattling the dog food bowl. However, let me be clear, that’s not all. The President is apparently intensely concerned that people understand him. Behold the list put together by the AP.

Let me be clear,” he said in describing his surprise at winning the Nobel Peace Prize. “I do not view it as a recognition of my own accomplishments, but rather as an affirmation of American leadership on behalf of aspirations held by people in all nations.”

“Let me be clear,” he said in one of his dozens of pitches for a health insurance overhaul. “If you like your doctor or health care provider, you can keep them.”

Terrorists? “Now let me be clear: We are indeed at war with al-Qaida and its affiliates.”

Student testing? “Let me be clear: Success should be judged by results, and data is a powerful tool to determine results.”

Iran? “Let me be clear: Iran’s nuclear and ballistic missile activity poses a real threat, not just to the United States, but to Iran’s neighbors and our allies.”

Auto bailouts? “Let me be clear: The United States government has no interest in running GM.”

In Moscow: “Let me be clear: America wants a strong, peaceful, and prosperous Russia.”

In Ghana: “Let me be clear: Africa is not the crude caricature of a continent at perpetual war.”

In Italy, bemoaning poor U.S. leadership on climate change: “Let me be clear: Those days are over.”

In Trinidad, announcing new aid: “Let me be clear: This is not charity.”

The president doth protest his clarity too much? That all depends…can you explain the health care bill?