Liberal Radio Host Goes After Malkin And Coulter: ‘Hate Hags’ Have ‘Moved The Dial On Creepy’ 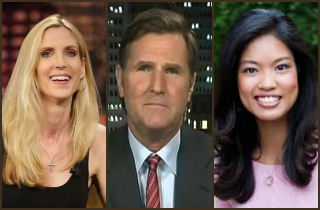 Filling in for Ed Schultz on the radio this week, liberal attorney and talk radio host Mike Papantonio tore into conservative female commentators like Ann Coulter and Michelle Malkin for what he views as their “creepy,” “malicious” rhetoric on immigration.

“If you spend much time in the weblog world, you probably have noticed,” Papantonio explained to his guest, “that the hate hags have become more creepier than usual. I mean, they’re already creepy but now they’ve moved the dial on creepy.”

He singled out Malkin for her “putrid hate language against immigrants, suggesting that they need to be punished, that militia border patrols should keep immigrant vermin, as she puts it, out of her country.” All this, he said, despite the fact that “less than 40 years ago, her parents Apolo and Rafaela Maglalang were citizens of Philippines, they became immigrants, they got their green cards and they made a better life for themselves in that little bundle of hate known as Michelle.”

Papantonio’s attack on the pundits was part of a longer conversation on how he believes the Cumulus dispute with Sean Hannity and Rush Limbaugh signals a decline in conservative “hate talk” radio.

“It’s simple,” he asserted, “Even the lunatic cable TV and right-wing crazy radio networks, they only have so much time that they can devote to female hate freaks or any kind of hate freaks, like Malkin or her gutter-mouthed sister Ann Coulter. There’s a limited amount of real freakish hate time available.”