Christian Radio Host To Voice Of Russia: Your Country Is ‘Not Homophobic, It’s Homo-realistic’
AUDIO

Christian Radio Host To Voice Of Russia: Your Country Is ‘Not Homophobic, It’s Homo-realistic’ 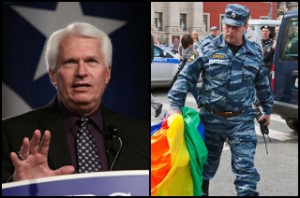 Russia’s new anti-gay laws have been eliciting some harsh reactions from the rest of the international community. So what better way for the country to defend itself than with it’s international radio broadcasting service (or propaganda arm, depending on how you look at it) The Voice of Russia? And now, the VOR has found a willing American accomplice in Bryan Fischer, the conservative Christian radio host and head of the American Family Association. Appearing on the service Thursday, Fischer declared, Russia is not being “homophobic” but rather “homo-realistic.”

Fischer, who VOR identified as an “expert” on the issue without explaining his credentials, told host Carmen Russell-Sluchansky:

He went on to cite Center for Disease Control statistics on HIV/AIDS that he claimed confirmed “homosexual behavior is just as risky to human health as intravenous drug abuse.”

VOR’s Russell-Sluchansky offered up his own defense of Russia’s new laws, in which citizens can be arrested for public displays of affection, positive tweets about the gay community, and wearing a rainbow flag. “Russia’s not actually outlawing homosexual relationships. It’s the promotion they are restricting,” said before explaining the homosexual relationships of any kind between minors have been outlawed.

On the issue of minors, Fischer used his expertise as Christian leader to explain:

“They’re going through a time when their physical bodies are changing, changing hormones. They need to learn to channel their urges in productive, life affirming directions which is not homosexual, it is heterosexual. That is God’s design. Sex is God’s gift to humanity. God designed sex exclusively for husband and wife. Policies should encourage young people to think that way.”

Finally, Fischer addressed the accusations that Russia’s policies liken it to Nazi Germany by saying it’s “invalid” to draw parallels between race and sexual orientation. “Race is an innate characteristic, immutable,” Fischer said. “You’re born with it. But homosexuality, always, at the end of the day, is a matter of choice. You can’t compare the two because you can’t choose your race, but you can choose your sexual behavior which is a matter of choice and human will.”

Fischer previously addressed Russia’s anti-gay laws on his radio show, arguing that American gay rights activists should embrace the laws in the spirit of “multiculturalism” and “diversity.” It’s bad enough that Fischer expends the amount of energy he does in this country promoting his homophobic theories, but to use his “expert” status to help Russia discriminate against its own people is an entirely new low.

Listen to audio below, via The Voice of Russia: