Limbaugh Hits McCain And Graham For Opposing Rand Paul, Dining With Obama: ‘Who Are They Siding With?’ 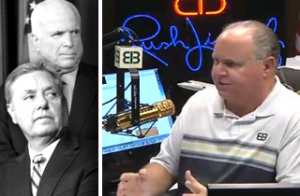 Rush Limbaugh took a call from a listener Friday that set him off on a rant against Senators John McCain and Lindsey Graham for their opposition to Sen. Rand Paul‘s filibuster. The caller demanded that McCain and Graham make a public apology to Paul on the Senate floor, and Limbaugh agreed.

“This incident, the Rand Paul filibuster,” Limbaugh said, “has turned things upside down in Washington.” He tied the older senators’ backlash against the younger Paul to the dinner they had with President Obama Wednesday night. Limbaugh expressed his outrage over the fact that McCain and Graham were lobbing insults at Paul while at the same time sitting down to dine with the object of Paul’s scorn. “Who are they siding with?” he asked.

Echoing Shepard Smith, who set off McCain by calling him “interventionist” Friday on Fox News, Limbaugh said, “There is a fear among McCain, Lindsey Graham, and others who favor an interventionist foreign policy.” Specifically, he said, old guard neo-con Republicans fear that Rand Paul is following in his father’s “isolationist” footsteps. “That’s why they’re calling Rand Paul a wacko,” Limbaugh said, “because that’s what they thought of Ron Paul.”

Limbaugh appears to be using his massive platform to stoke the latest rift emerging in the Republican Party, between those who support Rand Paul’s broad stand against military intervention and those, like McCain and Limbaugh, who would rather not disrupt the status quo.