Limbaugh Offers Tribute To ‘Bulldog For The Conservative Cause’ Andrew Breitbart 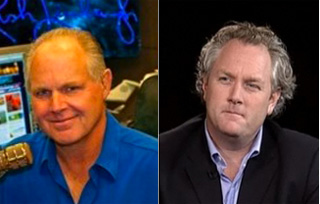 Today, as the political world reels from the surprise loss of Andrew Breitbart, the eulogies and tributes have already begun pouring in. On his radio show, Rush Limbaugh put aside time to speak about the man. Limbaugh pointed out that many “join the business” purely “to make a name for themselves.” And, while he admitted that Breitbart dabbled in some of that like we all do, Limbaugh argued that this was a man who mostly was striving to truly “effect change.”

“Breitbart was outside himself in all of his quests. When I say indefatigable, I never heard of him sleeping. I know he did, but he was constantly on the go. He was also a grateful guy and very thoughtful. He was a guest at our wedding in 2010, and about two months prior he sent Cookie a note, wanted to know if she knew who one of my most inspirational figures was. She told him. He presented us with a classic painting of Ronald Reagan, and every year since, every birthday, three birthdays, he has sent me a giant painting, a different rendering of the American flag.”

In a move that Breitbart himself probably would have enjoyed a great deal, Limbaugh spends much of his eulogy as an excuse to attack the liberal media, accusing the Associated Press of “misrepresenting” the deceased in their obituary and scoffing at some of the tweets he’s seen coming from “well-known left-wing journalists.” However, while Limbaugh claims to be horrified at the “unspeakable callous and coarse mean-spiritedness today,” he makes a point of adding that, in the end, it was something that Breitbart would have loved since each joke and insult was “a testament to his effectiveness and how effective he was.”

Listen to Limbaugh’s tribute below: