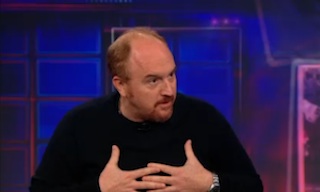 Louis C.K. really does exist in some kind of a rarefied air right now. The guy has made so much unqualified good happen in recent years (tv shows, talk show appearances, stand up specials, completely challenging distribution methods, that time he fed all those people with bread and fish, etc.) that people care about his opinion in a way that only happens to a few entertainers per generation. So, when it appeared that he had come down whole heartedly on the pro-Daniel Tosh Rape Jokes during the huge controversy last week, people took notice. Last night, C.K. appeared on The Daily Show to give the much more nuanced take on the subject that we expect from him. Basically, everyone is being an idiot.

RELATED: Harris-Perry Takes On Daniel Tosh’s Rape Jokes And What Is Appropriate For Comics To Joke About

C.K. told Jon Stewart that his tweet that many had viewed as a defense of Tosh, was literally just him complimenting the guy on a good show and that he had sent it without even knowing there was a huge controversy going on (if this were anyone except Louis C.K., I’d view this story as slightly convenient but, either way, it’ll make for a great plot for Louie season 4). He then explained that, now that he’s actually looked into the story, the main problems were that it was a battle between sides that will never back down (Comedians spewing bile vs. Bloggers spewing bile, and Comedians who can’t take criticism vs. Feminists who can’t take a joke).

However, while C.K. explained that he still thinks any topic, no matter how awful, should be fodder for jokes, he realizes that the dialogue going on, no matter how angry, is always a good thing.

But now I’ve read some blogs about this whole thing that enlightened me to things I didn’t know. This one woman said how rape is something that polices women’s lives. They have a narrow corridor. They can’t go out late, they can’t go in certain neighborhoods, they have to dress a certain way. And that’s part of me now that wasn’t before. And I can still enjoy a good rape joke so I have both now.”

In response, Stewart joked, “I don’t like the way you evolve as a person.”